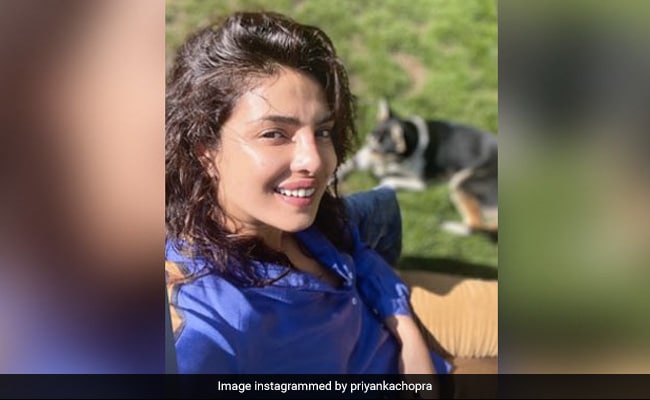 Priyanka Chopra, who is currently staying in London, spent her Monday with her adorable pet pooch Panda. Priyanka’s latest Instagram story is proof. The Sky Is Pink actress posted a picture of herself on the platform in which she can be seen sunbathing in the garden. In the sun-kissed selfie, Priyanka is sporting a blue shirt and light brown pants. She is flashing a beautiful smile in the frame. Her face is glowing in the sunlight. In the picture, we can also see a blurry glimpse of Panda at the back, who accompanied Priyanka while she was enjoying the bright sunny day.

In the caption, Priyanka tagged the official Instagram page of her pet pooch Panda and wrote, “Fresh faced Monday with Panda the punk.”

Priyanka Chopra and her husband Nick Jonas have three pet dogs, namely Diana, Gino and Panda. Priyanka frequently posts pictures of herself with the pet pooches on her Instagram handle.

See some of her posts featuring their pet dogs.

We are talking about these looks.

In terms of work, Priyanka Chopra was last seen in Ramin Bahrani’s Netflix film The White Tiger this year. Priyanka is now gearing up for two films Matrix and Text For You. She also has a TV show titled Citadel coming up.