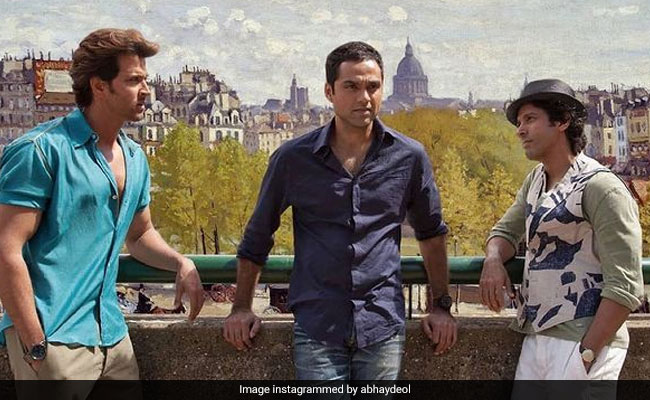 A still from the film. (courtesy abhaydeol)

Tiger Baby Films, the official Instagram page of Zoya Akhtar’s production house, shared a BTS video from the sets of the 2011 film Zindagi Na Milegi Dobara, in which Abhay Deol can be seen sharing trivia about the popular “Mantal bwoy” scene as he looks back at the making. He revealed in the video, that Hrithik Roshan “almost killed” him and Farhan Akhtar during the filming of the scene. Here’s what happened. “Before shooting this scene, Hrithik almost killed me and Farhan,” Abhay Deol said in a voiceover. Hrithik Roshan, who was driving the car, parked it on the roadside but forgot to switch off its ignition. Hence, it began to slide. What followed was Farhan Akhtar jumping out of the car. “Farhan was really fast. He jumped out immediately, and I sat there thinking I’m going to die now,” Abhay Deol added.

The caption on the post shared by Tiger Baby Films read, “We make films for the silver screen but the little stories that make the big picture don’t always come through. Here’s introducing our ‘Off The Record’ series where cast and crew from the Tiger Baby clan let us in on what went into creating some of their best scenes, what their psychology was in that moment and why this particular scene will always remain unforgettable to them.”

Directed by Zoya Akhtar, the film followed the lives of three friends, who reunite during a road trip in Spain and end up discovering themselves during the adventurous journey. The film redefined friendship goals and proved that road trip plans do work out (sometimes). Zindagi Na Milegi Dobara also featured Katrina Kaif, Kalki Koechlin and Naseeruddin Shah. The film emerged as a hit at the box office.