In the farewell to Justice SA Bobde, who retired as the Chief Justice yesterday, Justice NV Ramana said, “We are going through testing times as we battle the Covid wave. 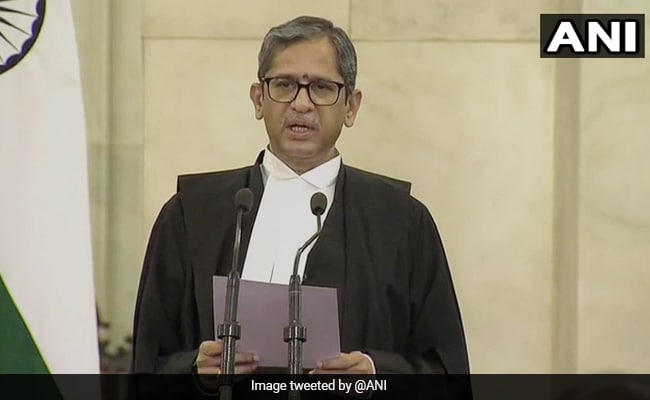 Justice NV Ramana took oath as the 48th Chief Justice Of India this morning. President Ram Nath Kovind administered him the oath at Rashtrapati Bhavan in Delhi in a small ceremony due to Covid restrictions.

In the farewell to Justice SA Bobde, who retired as the Chief Justice yesterday, Justice Ramana said, “We are going through testing times as we battle the Covid wave. Lawyers, judges and court staff are all affected due to the virus. Some hard measures may be necessary to break the chain of transmission. We can defeat the pandemic together with dedication.”

Another challenge Justice NV Ramana faces is filling up six vacancies in the top court.

During Justice SA Bobde’s tenure, not a single judge has been appointed to the top court.

In his nearly four-decade-long career, Justice Ramana has practiced in the High Court of Andhra Pradesh, central and Andhra Pradesh Administrative Tribunals and the Supreme Court of India in civil, criminal, constitutional, labour, service and election matters. He has specialised in constitutional, criminal, service and inter-state river laws,” as per his profile on the official website of the Supreme Court.

He was elevated as the Chief Justice of Delhi High Court in 2013 and as a judge in the top court in 2014.

Justice Ramana was part of a bench that ruled that suspension of Internet in Jammu and Kashmir should be reviewed immediately. He was also part of the panel of judges which held that the Chief Justice’s office comes under the ambit of the Right to Information Act.