In an Instagram story, Kangana Ranaut wrote that her post was deleted because she “threatened to demolish COVID” 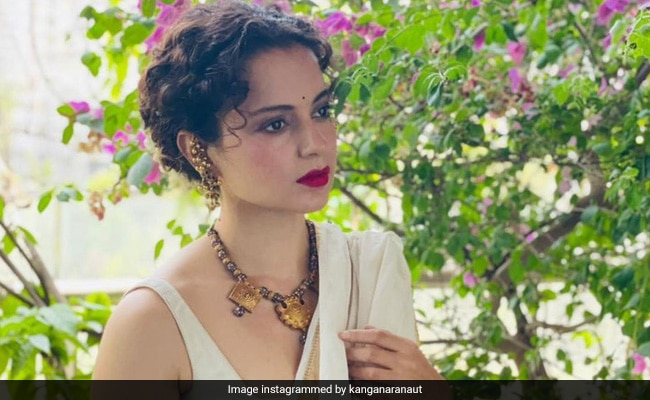 Kangana Ranaut said that her post had been deleted in an unrepentant way (Image courtesy: @kanganaranaut)

Kangana Ranaut’s post announcing she had tested positive for COVID-19 has been deleted by Instagram, the actress revealed in an Instagram story. On Saturday, Kangana shared a tone-deaf post in which she not only announced that she has been infected with the virus but also wrote dismissively of it as a “small time flu which got too much press.” She was strongly criticized in the comments thread for her insensitivity and for spreading misinformation – India is battling a brutal second COVID wave with over 4,000 deaths a day, compounded by a severe shortage of oxygen and other medical resources.

Kangana Ranaut’s typically unrepentant Instagram story claims Instagram deleted her post because she “threatened to demolish COVID”; she also takes a jibe at what she calls a “COVID fan club.”

Last week, Twitter took away the actress’ megaphone; her Instagram and Facebook accounts are still active but, as she notes in her Instagram story, perhaps not for much longer – “don’t think will last here for more than a week,” she wrote. 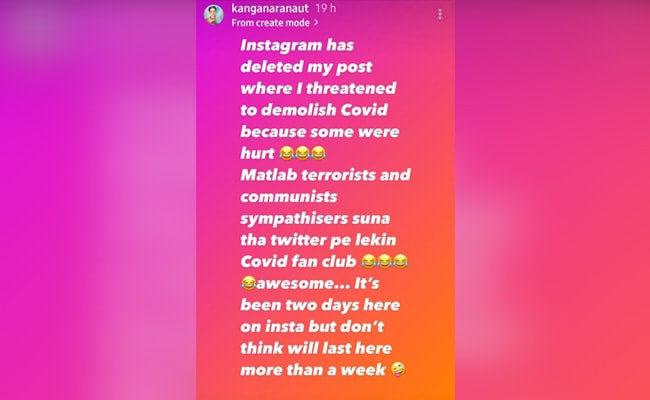 Kangana Ranaut joined social media only last year, taking over the official accounts managed by her team to tweet and post personally in August 2020. Her sister Rangoli Chandel had been permanently suspended from Twitter for hate speech some months before.

Last week, Kangana Ranaut was also suspended permanently by Twitter after controversial tweets on the West Bengal election results and post-election violence. She had also been widely criticized and ridiculed for her tweets on the oxygen crisis.

Kangana Ranaut, who’s new film Thalaivi has been postponed because of the spike in COVID cases, said in her deleted Instagram post that she had been feeling weak and tired and had taken a COVID test ahead of travelling from Mumbai to her hometown in Himachal Pradesh. The film industry has been badly hit by the Coronavirus surge – actress Shilpa Shetty’s family is currently battling the virus; Aamir Khan, Alia Bhatt and Ranbir Kapoor recovered from COVID in the last couple of months; Akshay Kumar was briefly hospitalized with it and over 40 crew members working on his new film Ram Setu tested positive.