Replying to Kareena’s post, Kunal Kemmu wrote: “Hahahahaha… Yes, yes we have to.” 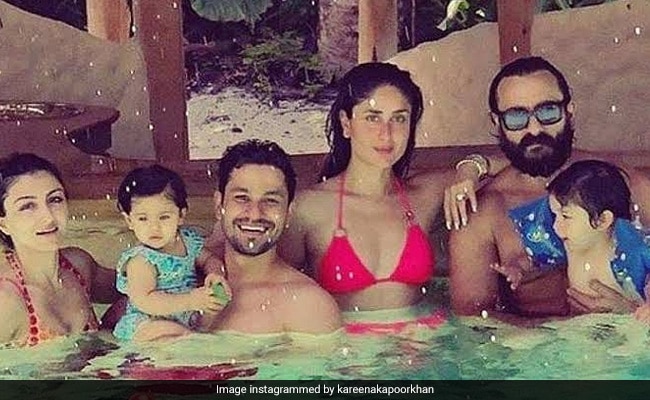 Kunal Kemmu, who celebrates his 38th birthday today, received a perfect birthday greeting from his sister-in-law Kareena Kapoor, who posted a throwback from Maldives to wish the birthday boy. The picture happens to be a throwback from their family vacation together, where Kareena was accompanied by her husband Saif Ali Khan and son Taimur Ali Khan, and Kunal was there with his wife Soha Ali Khan and daughter Inaaya Naumi Kemmu. The family can be seen happily chilling together in the pool as they pose for the camera. Kareena Kapoor captioned the post: “Happy Birthday, brother-in-law… I promise we will recreate this picture soon… Have a lovely one.” Replying to Kareena’s post, Kunal Kemmu wrote: “Hahahahaha… Yes, yes we have to.”

Kareena and Kunal Kemmu co-starred in Rohit Shetty’s 2010 film Golmaal 3, while Saif Ali Khan and Kunal Kemmu shared screen space in the 2013 film Go Goa Gone. Kunal Kemmu had a busy schedule last year, with Malang, co-starring Anil Kapoor, Disha Patani and Aditya Roy Kapur. He also starred in Lootcase, for which he received massive praise from the critics as well as the audiences. The film released on streaming platform Disney+Hotstar.

Kareena Kapoor  was last seen in the 2020 film Angrezi Medium, co-starring late actor Irrfan Khan, and actress Radhika Madan. Kareena will next be seen in Aamir Khan’s Laal Singh Chaddha, which is a remake of the 1994 film Forrest Gump. Kareena shot for parts of the film during her pregnancy last year.