Karnan Review: Dhanush plunges headlong into the role of a hot-headed young man at odds with the world and surfaces with a sterling performance that ebbs and peaks with the rhythms of the narrative. 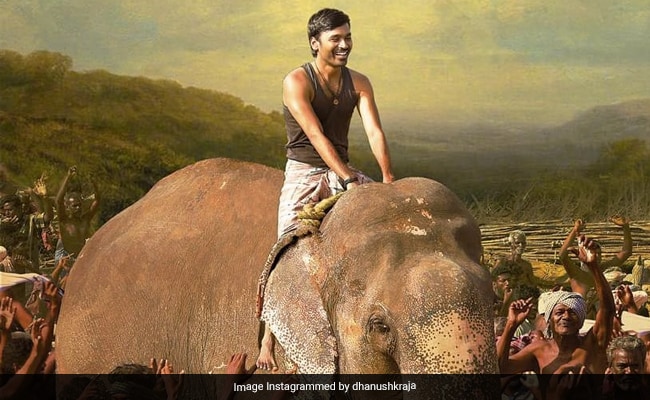 Karnan: Dhanush in a still from the film. (courtesy: dhanushkraja)

Mari Selvaraj has done it again. Not that we weren’t expecting it. In his powerful 2018 debut film Pariyerum Perumal, the writer-director had banked upon a steady flow of kinetic energy and loaded verbal exchanges to tell the story of a man determined to break free from caste discrimination. The film deservedly earned him admirers overnight. In Karnan, working with a crowd-pulling star (Dhanush) cast as an irrepressible rebel driven by rage against power-crazed tormentors, Selvaraj does not abandon his basic strengths, which clearly stem from a strong social consciousness born out of experience, while providing an even more breathtaking demonstration of his rapier-sharp cinematic acumen.

The story isn’t out of the ordinary. In fact, one might be inclined to describe Karnan as just another big-screen rendition of a battle between those who have nothing to lose and those who are determined not to part with their power to oppress, exploit, grab, pillage and burn. What will stop you from going any further with that inference is the sure-handed manner in which Selvaraj orchestrates the key tools at his disposal.

Aided by cinematographer Theni Eswar, whose canvas is varied and methods unhindered by spatial restrictions, and music composer Santhosh Narayanan, whose songs are stirring, Selvaraj attains the sort of synthesis of action, words, background score and, most important, visual flamboyance that instantly elevates a film to a distinctly higher plane.

If Pariyerum Perumal was about a youngster fighting to assert his identity in the face of continued indignities, Karnan centres on a dispossessed village standing up for its right to basic human dignity. The canvas is wider, the treatment of the theme of rebellion against exploitation is more elaborate, and the socio-political commentary is invested with greater buoyancy.

Dhanush plunges headlong into the role of a hot-headed young man at odds with the world and surfaces with a sterling performance that ebbs and peaks in perfect consonance with the rhythms of the narrative. He combines a warm ruggedness with a devilish swagger to conjure up a figure whose invincibility is indicated not by means of any overt manifestations of physical might but through a firm, unwavering resolve to put an end to the history of humiliation that his village has been subjected to.

The titular hero sports a T-shirt with Rajinikanth’s face on it. In a later scene, his sweetheart (Rajisha Vijayan, in her first Tamil film), dons the same top. But by no stretch of the imagination is Karnan an invincible Thalapathi-like dynamo, irrespective of how grandiose his entry earlier in the film has been. He is in essence an Everyman Hero blessed with the dogged determination not to accept his lot in life.

Repeatedly stabbed by the realization that his people have for too long been receiving the rough end of the stick from those that wield power, social and political, he turns on the oppressors with the force of a tornado. The bristling young man takes up cudgels (actually improvised weapons and machetes before a sword is unsheathed in the climax) despite knowing the risks involved. It is a winner-takes-all war, so the one who has nothing stands to gain the most provided he is the last man standing.

The marginalization of Karnan’s village is denoted by the absence of a bus stop. When the villagers want to board a public transport vehicle, they wave feverishly at the driver hoping to catch his attention. But instead of halting, the buses invariably gather speed and race away, leaving the forsaken to their own devices. So, when the village boys have to get to a CRPF recruitment test that might change their lives, their only mode of transport is a tractor.

This might seem like a mundane issue, but when it is coupled with decades of institutionalized neglect and violence, it reflects the existence of a deliberate, well thought-out strategy to keep these people cut off and underserved. The neighbouring upper caste village, the police force and the administration are all complicit in the conspiracy.

Karnan is a guy seething with rage and with good reason. A few of the battles that he fights – he is, of course, meant to recall the Mahabharata’s quintessential outcast, Karna – are personal in nature and scope, but the big, important one that he must wage has a larger, even mythical, context, which Selvaraj establishes from the word go.

The opening sequence of Karnan reveals an epileptic girl frothing at the mouth and lying prostrate on a busy road. Cars and buses drive past her in both directions without stopping, as if she were a speck of dust. Life ebbs out of her. The camera pulls away skywards, giving the audience a top-down view of the helpless body. The girl acquires the visage of a goddess – this is exactly how the myths of oppressed people evolve as a means of both recompense and assertion – and begins to watch over the village as an involved observer.

The repeated appearance of the goddess lends the film a surreal quality and takes it beyond the parameters of a conventional downtrodden-pitted-against-persecutors construct. The Pariyerum Perumal dog, Karuppi, takes the form of a black horse in Karnan. That apart, a donkey with its forelegs tied limps around as the men and women go about their lives – the animal is metaphor for the people of the village at large. It is crying out to be liberated from its bondage so that it can run free.

From the mythic to the political, Selvaraj makes the back-and-forth transitions with immense confidence and flair. When no bus halts at the village to give a pregnant woman a ride, an angry Karnan leads a violent act, which, in turn, provokes an instant reprisal by the police, led by IPS officer Kannapiran (Natarajan “Natty” Subramaniam, known to Hindi movie audiences as the DP of Black Friday and Jab We Met).

Selvaraj’s eye for detail asserts itself everywhere. On the walls of a police station are framed portraits of historical personages from public and cultural life, but the personality who has special attention directed towards him is Babasaheb Ambedkar. In the melee, something strikes the side of the icon’s portrait. It sways a bit, seems to be in danger of being knocked off the wall, but steadies itself as if conveying an acknowledgement, even an endorsement, of the emphatic awakening of the villagers.

In the process of giving Karnan a firm anchor, Dhanush receives noteworthy support from Lal in the role of a feisty elderly villager and Natty as a man in uniform who doubles up as the hero’s principal adversary.

Karnan is a veritable tour de force, an action film that isn’t just fists and lung power, but also a lot of heart. It is another affirmation of Mari Selvaraj’s grasp on the medium.

Mahindra Says It Has No Plans To Launch Current Variant Of...