Parimutuel betting on Saturday’s Kentucky Derby started Friday morning, and when post positions were drawn, there were more than a few eyebrows raised when Zandon was installed as the morning-line favorite.

Zandon, a Chad Brown-trained colt coming off a win in last month’s Blue Grass Stakes, was installed as the 3-1 favorite by Churchill Downs oddsmaker Mike Battaglia. Louisiana Derby winner Epicenter, a horse that had been favored on numerous futures boards, was the second choice at 7-2.

Only one other horse, Messier, drew single-digit odds, with the former Bob Baffert-trained colt posted at 8-1. Taiba, another former Baffert colt who beat Messier in the Santa Anita Derby, was posted at 12-1.

Keep in mind, morning-line odds at tracks are informational only. They’re not always how the oddsmaker would bet, nor are they always a reflection of which horse is the best. Rather, it’s a prediction of how the oddsmaker sees betting action unfold.

Parimutuel odds fluctuate as money comes in on horses, and a good chunk of that won’t be placed until minutes before the race starts. You won’t know what odds you’ll get for your pick until the race goes off, and sometimes you’ll even see it change after the race starts when last-minute bets are added to the pool.

My advice when you’re handicapping the Kentucky Derby, or any race actually, is to not look at the morning line odds. Study their past performances, and see if they have a history at that track. Check for any changes, especially in the jockey or equipment. Find out if they perform better on fast or off tracks. Look at who they’ve raced against in the past, and if this race represents a step up (or, in non-Derby cases, down) in competition.

From there, you should find a horse or two that you believe stands out. Bet accordingly and, as always, reasonably.

The morning line did not impact how Circa Sports handicapped the Kentucky Derby, oddsmaker Paul Zilm told Casino.org earlier this week. The Las Vegas sportsbook offers fixed odds on the race in Nevada and made Epicenter and Zandon co-favorites at +485. Circa offered Messier at +625, and Taiba +700 (or 7-1).

On Thursday, Zilm told Casino.org that two longer shots, Mo Donegal and Crown Pride, “have drawn a bit more of the action,” and their respective odds have changed accordingly. Wood Memorial winner Mo Donegal started at +1250 and entered Friday at +1000. Crown Pride, a Japanese-based colt who qualified by winning the UAE Derby, dropped from +3300 to +2400.

“Lots of little nibbles on the Epicenter and Zandon, but nothing significant,” Zilm said. “Haven’t gotten overloaded on anyone just yet.”

Robert Kowalski at Baldini’s in Sparks, Nev., told Casino.org his book as seen “big bets” on both Mo Donegal and Crown Pride but “trace” amounts on the favorites.

Before Monday’s post position draw, many considered Epicenter would be the favorite going into the race, and by posttime Saturday, the Steve Asmussen-trained colt may very well be the favorite.

So why was he made the second choice? It may have to do with where the colt will start the race.

On Monday, Epicenter drew the third gate in the field of 20. In most races, breaking from there wouldn’t be a bad spot, but when you have 16 horses on your outside looking to move over as quickly as possible, it means you can get squeezed rather quickly. And if you want to avoid that, it means a fast start out of the gate is necessary, and that could affect how strong a horse is at the finish.

Like any race, you want to get away nicely from the gate and go from there,” Asmussen said after the draw. “How long he stands in there, how long it takes to load, 150,000 people staring at him – it’s a lot. (Jockey) Joel (Rosario) is very confident, in rhythm of the horse. So, if he is away cleanly Joel will let him be who he is.”

It’s been 24 years since a horse won the Derby from the third post. The last time a horse finished in the money from that spot took place nine years ago.

As far as Messier and Taiba, the Tim Yakteen-trained colts drew sixth and 12th, respectively.

Just before parimutuel betting started Friday, Churchill Downs announced that Ethereal Road, a horse trained by D. Wayne Lukas, was scratched from the race. Since the move happened before betting started, the horse was replaced by Rich Strike.

The 148th running of the Kentucky Derby is set to start at 6:57 pm ET on Saturday. NBC will broadcast the 1-1/4th-mile race. 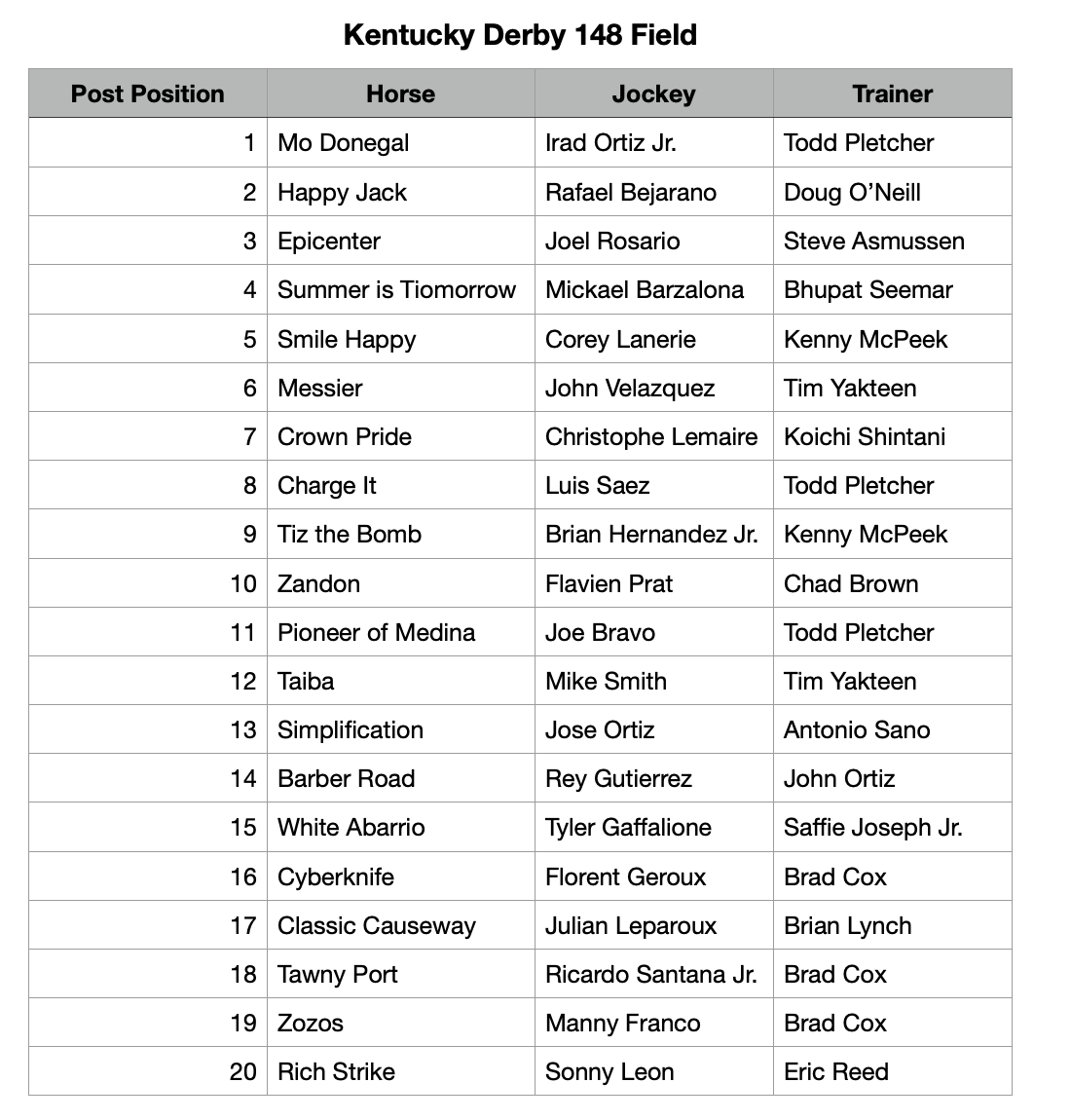