With less than a week before the Kentucky Derby, the field for the 148th running of the classic race is almost set.

On Sunday, Early Voting’s owner notified Churchill Downs the Wood Memorial runner-up would not run in next Saturday’s race. That opened up a spot for Pioneer of Medina, who was next in line according to the Kentucky Derby points system.

Post positions for the race will be drawn Monday afternoon. With 20 horses in the field, the draw will likely play a big role in how bettors wager on the race. If a popular horse, like Epicenter or Messier, pulls an outside gate or the first along the rail, it could cool interest in those horses.

Initial odds will be posted after the draw, with pari-mutuel wagering starting Friday on the 1-1/4-mile race.

Fixed-odds futures wagering is available at some Nevada sportsbooks, including Circa Sports and Baldini’s.

Epicenter, who is coming off a record-setting win in the Louisiana Derby, trained on the Churchill Downs track Sunday morning, completing five furlongs in 1:01 over a muddy track.

It was his final scheduled workout before the Derby, and it was delayed by nearly two hours because of overnight rains. Trainer Steve Asmussen, who seeks his first Kentucky Derby win, said he was a little concerned about the weather, but he has full confidence in his horse.

I am unbelievably excited to be doing this well with this much on the line,” he said. “I had a pretty anxious drive last night with rain and thunderstorms for most of it, and if it’s meant to be then it’s meant to be, but everything seems to be working out perfectly.”

At Circa Sports, Epicenter is the +495 favorite (odds current as of Sunday afternoon ET), but the Las Vegas-based sportsbook only considers him a slight favorite over Blue Grass Stakes winner Zandon (+565), Santa Anita runner-up Messier (+590), and Santa Anita winner Taiba (+635).

Baldini’s currently lists Epicenter, Taiba, and Zandon at +600. Messier is the fourth choice for the Sparks-based sportsbook at +800. 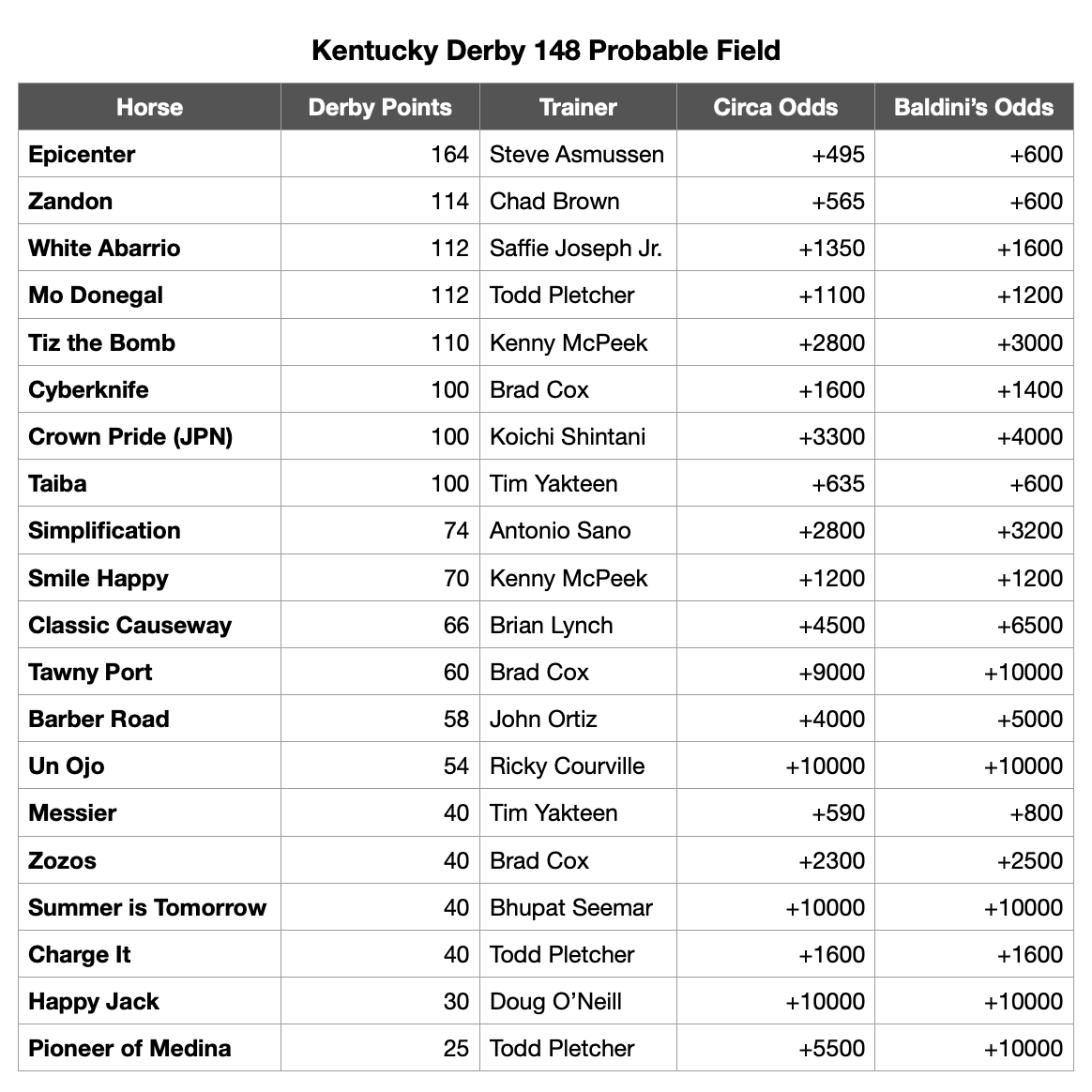 One horse that has grabbed more attention through his workouts has been Cyberknife. The Arkansas Derby winner didn’t get the same buzz that Epicenter, Taiba, and Zandon did after winning their major prep races, but the Brad Cox-trained colt has put up some sharp training times in recent weeks.

Two weeks ago, he covered five furlongs in a minute. Last week, he covered six furlongs in 1:12.2, and in another six-furlong training session Saturday, which Churchill Downs captured on video, Cyberknife cut a full second off that.

Take a ride on #KyDerby contender Cyberknife. Hold on tight.

Cox became the first Louisville native to win the Derby as a trainer thanks to stewards disqualifying Medina Spirit for a drug violation. With Tawny Port and Zozos, he has three horses likely in the field this year, and Cyberknife could be his best bet to finally celebrate in the winner’s circle.

Cyberknife is currently available at +1600 at Circa, while Baldini’s offers him at +1400.