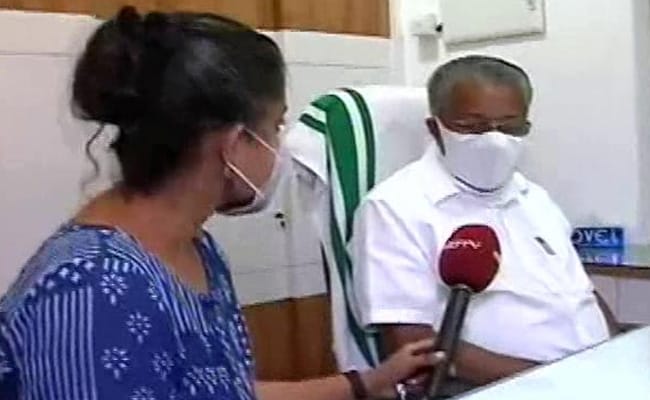 Pinarayi Vijayan said the BJP failed because it tried to stir up religious strife.

Kerala Chief Minister Pinarayi Vijayan, rejuvenated by a fresh and decisive mandate today, chose to focus considerably on attacking the BJP-led opposition alliance even though his government’s main rival remains the Congress-led United Democratic Front (UDF). In an exclusive interview with NDTV, he said the ruling front’s victory in the Assembly election symbolised Kerala’s rejection of religious divisiveness.

The Left Democratic Front today retained power in Kerala, cornering up to 97 seats — six more than in 2016 — defeating the UDF and the BJP-led National Democratic Alliance (NDA). The feat is being dubbed historic because the state has for decades alternated between the LDF and UDF every five years without fail. The NDA, a key third pillar in the state’s politics, lost even its single standing seat — Nemom — to the LDF.

Even as the final votes were still being counted, Mr Vijayan, who himself won the Dharmadom constituency in Kannur by a huge margin today, attacked the NDA saying it was trying to stir up religious strife in the state long known for its social harmony.

“Kerala is not a place for the BJP. Kerala will not accept communalism or religious divisiveness,” Mr Vijayan told NDTV. “The BJP won its last seat because of cross-voting by the Congress or UDF. We had said we will close the BJP’s account in Kerala.”

The NDA today lost Nemom in Thiruvananthapuram despite fielding one of its best-known candidates from there, former Mizoram Governor Kummanam Rajasekharan. Some other big NDA names, like Metro Man E Sreedharan and state BJP chief K Surendran, too, sputtered to failure.

Mr Vijayan also rebuked the Congress, especially its leader Rahul Gandhi, for focusing on Kerala when they ought to be taking on the BJP in other states.

“Rahul Gandhi is a national leader but people are not willing to see him tear into the Left in Kerala. There are many BJP-led states where he can go and campaign. Instead, he focuses on Kerala,” Mr Vijayan said.

The people of Kerala chose the LDF’s return, he said, because of the several pro-people measures taken by his government. Irrespective of him becoming the Chief Minister again or not, the LDF will ensure that the state’s development continues, he assured.

However, the devastation wreaked by COVID-19 remains a challenge.
“We will have strict lockdown-like restrictions. Our focus is to avoid affecting production and the construction sector,” the veteran communist said.

Referring to the main opposition and its key alliance partner, the Congress, Mr Vijayan said there was no common ground between them and the LDF.

West Bengal, where the Left is in alliance with the Congress against the Trinamool and the BJP, is a peculiar case, he said.

“The BJP and the Congress are on the same ground when it comes to economic policies. We do not agree with them,” Mr Vijayan said.

'Baba Ka Dhaba' Couple Back In Their Old Eatery Again As...