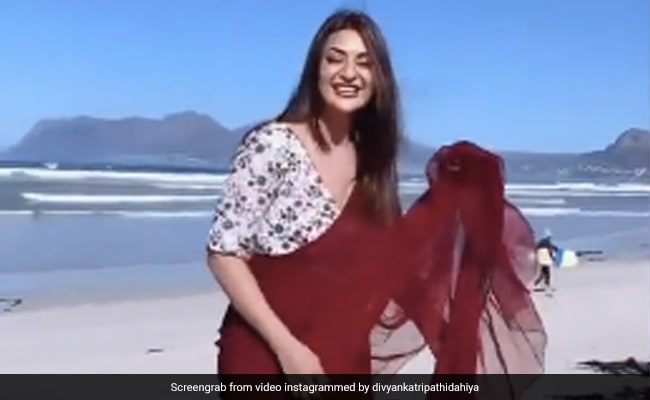 Divyanka Tripathi in a still from the video.(Image courtesy: divyankatripathidahiya )

TV actress Divyanka Tripathi, who is currently shooting for the upcoming season of the reality show Khatron Ke Khiladi in Cape Town, is winning hearts with a recent video that features her dancing by the beach. In The video, the actress can be seen wearing a gorgeous red ruffled saree as she dances to the song Suraj Hua Maddham. Singer and Divyanka’s Khatron Ke Khiladi co-contestant Aastha Gill can be seen singing the song. The background of the video features a captivating view of the ocean and the hills. The video also features another Khatron Ke Khiladi contestant Sana Makbul. Aastha Gill shared the video on her Instagram story and Divyanka Tripathi later re-shared it on her Instagram story.

Here’s a screengrab of the video featuring Divyanka: 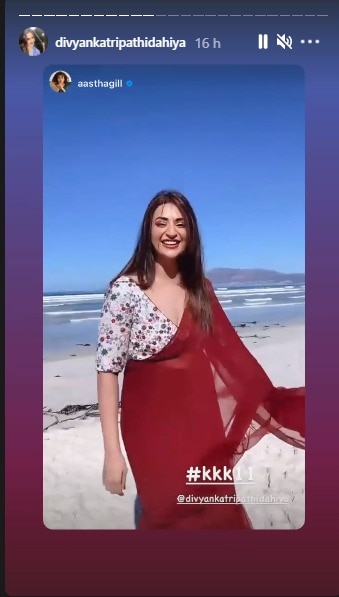 Besides the fun video, the 36-year-old actress also clicked two selfies of herself by the beach side. She shared the pictures on Instagram on Wednesday. In the pictures, she can be seen wearing the same red saree. She paired the saree with a white sequined blouse. Divyanka can also be seen sporting black wayfarer sunglasses in the pictures. Seems like the actress is still in a musical mood as she wrote: “Suraj hua Maddham,” in the caption of the post. Divyanka’s husband and TV actor Vivek Dahiya continued the song in the comments section of the post but changed the lyrics to express his envy towards Divyanka. “Duur baitha patti jalne laga (The husband started feeling envious from afar),” he commented.”

Check out her picture here:

Khatron Ke Khiladi contestants are having a blast in Cape Town. Earlier in the day, Nikki Tamboli sent the Internet into a tizzy with her pictures from the capital of South Africa. In the pictures, the former Bigg Boss contestant can be seen posing in a blue swimsuit. “High tides & good vibes,” she wrote in the caption of the post.

Divyanka Tripathi is known for her work in TV shows. She is best known for playing lead roles in shows like Banoo Main Teri Dulhann, and Yeh Hai Mohabbatein.