“You can’t stop the waves but you can learn to swim,” Kiara Advani captioned the post 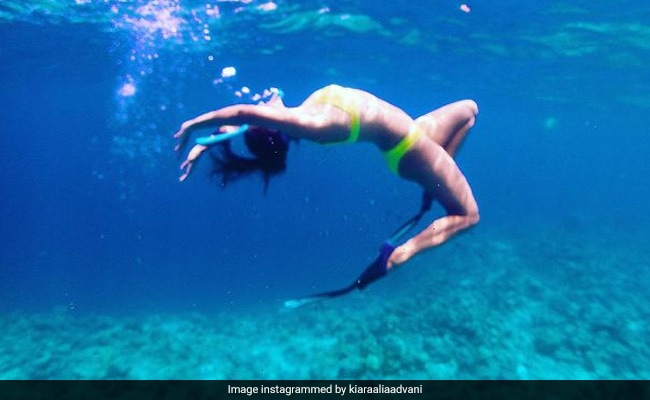 If we had to sum up Kiara Advani’s latest Instagram entry in a word, stunning is how we would describe it. On Sunday afternoon, the actress blessed our Instagram feed with a dreamy throwback picture. In the underwater photograph, Kiara Advani can be seen dressed in a neon green bikini. She did not reveal when or where the picture was taken but she did mention that it happens to be a throwback. The picture might be from Kiara’s Maldives vacation earlier this year, where she was accompanied by rumoured boyfriend Sidharth Malhotra. “You can’t stop the waves but you can learn to swim,” she captioned the post.

Check out the throwback shared by Kiara Advani here:

The actress flew to the island country along with her rumoured boyfriend and actor Sidharth Malhotra on the New Year’s Eve and welcomed 2021 in Maldives. “Looking at you 2021,” she had then captioned the post.

Kiara Advani was last seen in and Indoo Ki Jawani, opposite Aditya Seal. She also starred in the horror comedy Laxmii, opposite Akshay Kumar, last year. Her upcoming projects include Shershaah, co-starring rumoured boyfriend Sidharth Malhotra and Bhool Bhulaiyaa 2, alongside Kartik Aaryan and Tabu. She will also be seen in Jugg Jug Jeeyo, with Anil Kapoor, Neetu Kapoor and Varun Dhawan.

Kiara Advani stepped into Bollywood with the 2014 film Fugly. However, her breakout film was 2016’s MS Dhoni: The Untold Story, co-starring Disha Patani and late actor Sushant Singh Rajput. Kiara has also been a part of films like Bharat Ane Nenu, Vinaya Vidheya Rama, Kabir Singh, co-starring Shahid Kapoor and Machine, among others.