Sure, everyone can wander through the Strip, but Vegas has a lot of other hidden gems. The best way to truly enjoy Las Vegas is to go freewheeling through the city. Of course, hit the obvious hot spots, but also search out places that are not “trending.”

Vegas is like creating a perfectly eclectic 10-song mixtape, with every track putting you in a different headspace and revealing parts of you to others.

If you’re looking for some new and unique experiences, including some lesser-known faves, check out these top 10 selections to experience the dazzling, the offbeat, and everything in between. While a couple are featured on the Strip, we bet there are a few new ones you haven’t experienced below.

Track #1: Office of Collecting and Design

If you like straying from the beaten path, try the intriguingly named Office of Collecting and Design. Possibly the most esoteric offering in Vegas, the museum is in the art-smart New Orleans Square (part of the city’s historic and on-the-rebound Commercial Center).

It’s not only her collections on display here, but items that other vintage enthusiasts have graciously donated, so that the smallest of things in this world won’t be forgotten.

This free museum is only open on Wednesdays from 11 am to 5 pm. If you’re unavailable during those hyper-specific hours, don’t fret—they’re happy to accommodate you with an appointment. Attention, hoarders: you now know where to unload your stuff.

Want to feel proudly American? Drive over to this big roadhouse on Warm Springs Rd. near Henderson, where pictures of the food grace the menu—my kind of place (you know what you’re getting when you order it). We went all-in for the platter with insanely juicy smoked spareribs, smoked chicken, and rib tips. Owners/creators Larry Lehrner and Larry Esguerra are committed to delivering Hill Country Texas flavors.

The meats here are “slow smoked on hickory, mesquite and oak for 13 hours.” The sides of mashed potatoes with gravy, coleslaw, baked beans, and cornbread were mighty fine, too.  We washed down our meal with sweet apple iced tea, and there was no way we could leave without pledging allegiance to the standout peach cobbler a la mode.

This down-home spot is the polar opposite of a high-end Vegas restaurant like The Bedford By Martha Stewart—where I assume the menu is photo-free—so I’m heartily recommending it.

Over at the Luxor, there’s plenty of excitement for this celebratory and immersive exhibition. The timing is perfect—it’s exactly 100 years since archaeologist Howard Carter discovered the lost and intact tomb of the boy king known as King Tut.

You’ll have fun wandering around the dark nooks and crannies here, becoming smarter by the minute. Crazy stuff went down 3000 years ago in Egypt—people who believed in the afterlife protected and preserved the dead via the meticulous mummification process.

You’ll also learn how families there, including royalty like King Tut himself, wound up with birth defects from their in-breeding. The highlight here, of course, is the recreation of the tomb with the “burial chamber that housed the shrines, sarcophagus and nested coffins that protected Tut’s mummy.” It’s all done tastefully (shout-out to Imagine Exhibitions), and you’ll get a clear sense of how thrilled Carter was to make his lucky discovery.

There are so many high-profile residencies by superstar music artists on The Strip that it’s easy to overlook the smaller legacy artists who are still on the circuit—like the ones who perform at this intimate and excellent-sounding venue downtown, where Sinatra once graced the stage.

Case in point: Tommy James and the Shondells, who recently showered the crowd with all their hits, including “I Think We’re Alone Now,” “Crimson and Clover,” and “Mony Mony”—songs that Tiffany, Joan Jett, and Billy Idol, respectively, would also take to the bank.

James was on fire vocally, and even if the band’s muscularity sometimes overshadowed the songs’ intimacy, the gig was still thrilling. I got to shake James’ hand when he ventured into the audience during an extended jam on “Mony Mony”—a pretty fearless thing for a performer to do in the Covid era.

In his set, James talked frankly about how his record label back then, Roulette Records, was a front for the Genovese crime family. You can read about that in depth in James’ eye-opening memoir, “Me, the Mob and the Music,” which he noted onstage is being made into a major motion picture.

With so many Italian restaurants in Summerlin, I think the area should soon apply for Little Italy status. There are exceptional fine-dining spots, including Aromi, La Strega, Osteria Fiorella, North Italia, Trattoria Reggiano, and Al Solito Posto at Tivoli Village, plus the casual Dom DeMarco’s, which was created in partnership with famous Brooklyn pizza joint Di Fara Pizza.

Chef Paula Smagacz serves up terrific “Italian comfort classics”—food to help protect you from an unforgiving world—in a seductively designed dining room with super-attentive waiters.  On a night out with friends, we ordered three solid appetizers—the bruschetta, shrimp scampi, and meatballs with ricotta—and segued into the spot-on veal marsala, chicken piccata, and salmon entrees, all served with linguini.

We topped the meal off with the finely prepared tiramisu and knew that we’ll be back soon to try the lasagna, lobster ravioli, and pizza. Looking over the menu, I have my eyes firmly on the enticing prosciutto and fig pizza with arugula and parmesan cream sauce.

Track #6: “iLuminate” at The Strat

One of the best ways to light up the night in Vegas is to head to The Strat for this fast-paced, joyously funky and technically marvelous dance revue that began on “America’s Got Talent” back in 2011.

On the night I was there, the audience ate up this party-starter merger of technology and dance, with plenty of surreal effects and illusions. “iLuminate” is gimmicky, of course, but it works. Long may the show run.

Having just marked its sixth-month anniversary in New Orleans Square, this mega-cool indie bookstore/art gallery/podcast studio is owned by two shining lights: writer Shwa Laytart and his wife Sugar. On the window outside, it proudly says, “Specialty. Subversive. Subculture”—an invitation to bohemians everywhere.

The shelves are lined with vintage and new books, including ones devoted to the occult, music, poetry, cannabis and more. Browse consciousness-raising and mind-bending books like “Santa Sold Shrooms” and “The Acid Test,” not to mention all of John Waters’ lovably twisted page-turners, include “Shock Value” and “Crackpot.”

Also for sale: Laytart’s own “Stoned History: Three Short Stories Zine.” I left with a fresh copy of Hunter S. Thompson’s “Fear and Loathing in Las Vegas” to commemorate my nearly three years of living here.

It’s always a treat to see a concert at the Venetian Theatre, the tri-level space that’s “inspired by The Paris Opera House” (it was originally built to present the old “Phantom—The Las Vegas Spectacular” show). Back in October, I saw The B-52’s there on the final night of their three-show engagement as part of their farewell tour, saluting a helluva 45-year run. The gig was exhilarating, but I remember leaving sad, wondering if rock would ever be as danceable and downright fun again.

So it’s terrific to hear that the best party band on the planet will return to the Venetian next year with a 10-show residency starting May 5 and wrapping September 3 (tickets are now on sale). The band, fronted by Fred Schneider, Kate Pierson and Cindy Wilson, irresistibly supply their dance-this-mess-around grooves and embrace their trash culture aesthetic on classics like “Planet Claire,” “Love Shack,” and “Rock Lobster.”

Their goodbye tour is the gift that keeps giving. 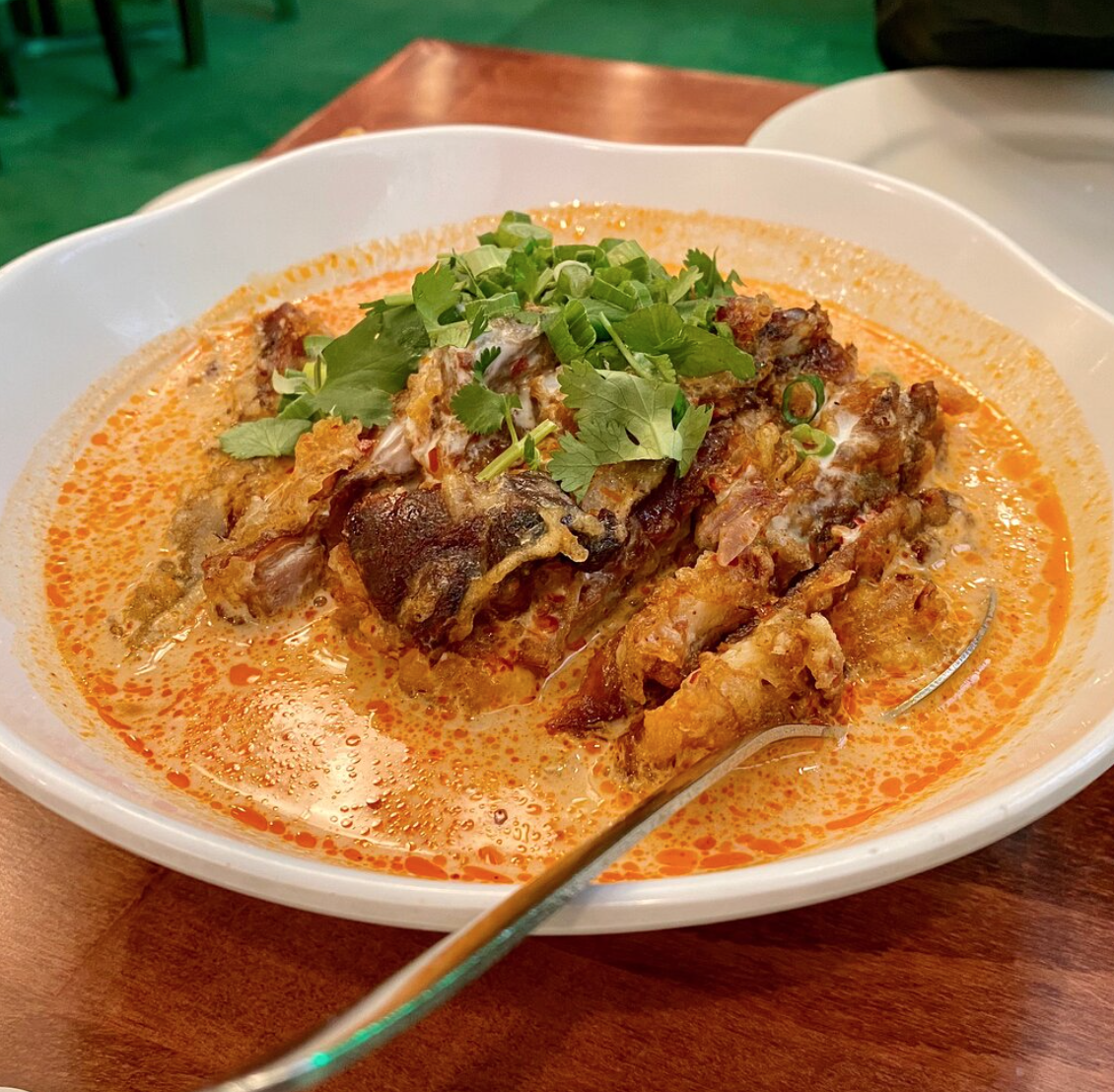 One of the top restaurants of the moment is the newly opened third location of Vegas’ long-revered Thai eatery Lotus of Siam. This one, at Red Rock Resort, is a multi-room visual showstopper with lots of bamboo, brick stone arches, and endless lanterns hanging overhead. Bonus: the overall lighting makes everyone look (and why not?) photoshopped and forever young.

Lotus’ partners told the Las Vegas Review-Journal that it cost “north of $5 million” to create this 8000-square-foot palace with 280 seats—and it looks like a home run. It was jam-packed on a recent Friday night, with a DJ on hand to further amp up the room’s energy. 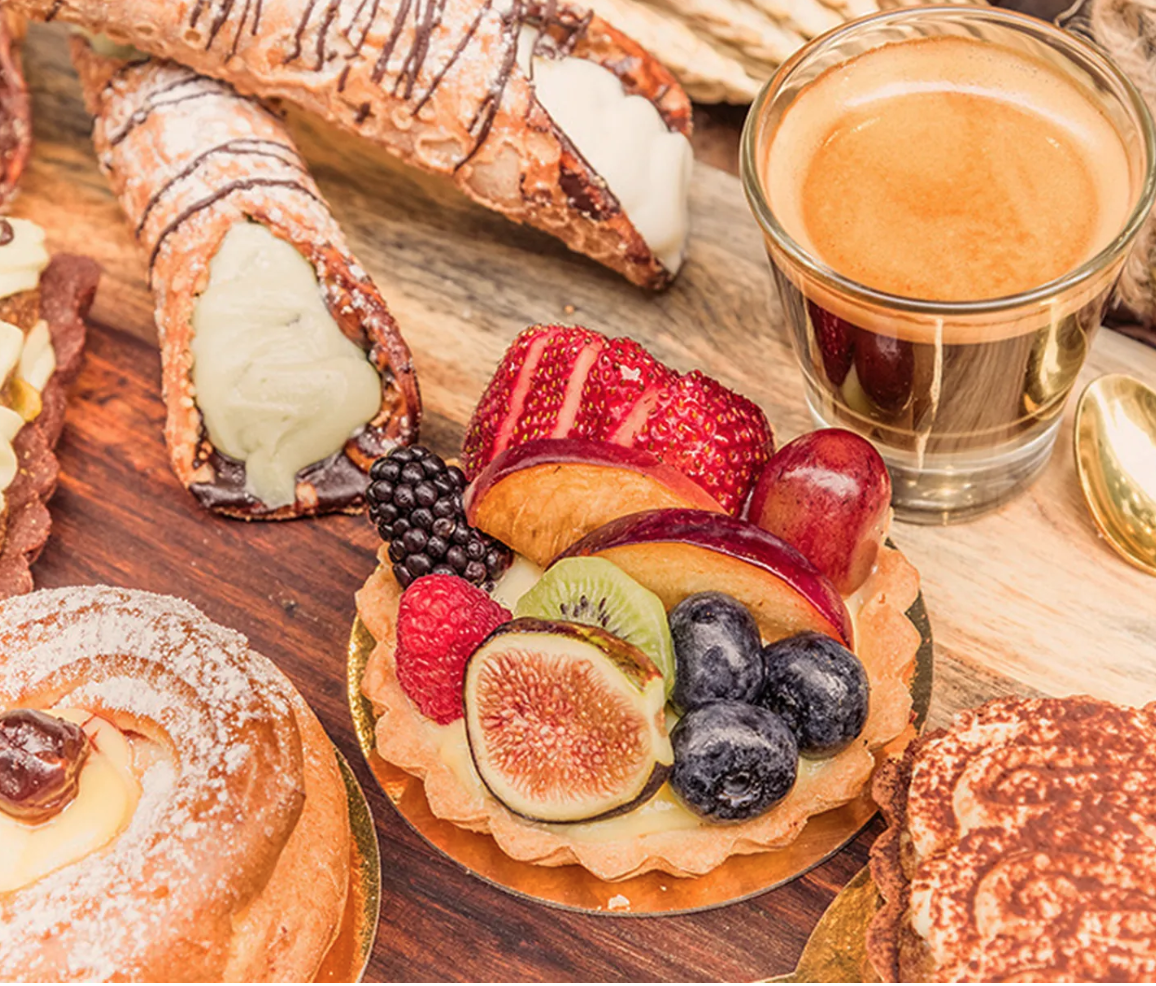 My Vegas mixtape ends on a sweet note—with one of my favorite dessert spots, Zeppola Cafe in St. Mark’s Square at The Venetian. It’s hard to resist their transcendent bombolones, which are Italian-filled donuts (I favor the custard one), and an array of Italian desserts, sandwiches and pizza.

This is the Vegas outpost of the Zeppola Bakery in midtown NYC, and I trust they will succeed here. There’s inside and outside seating, plus a hidden second level I stumbled on. From the windows up there, you can view the gorgeously lit St. Mark’s Square in all its perpetual magic hour glory.