“One day you will have the power to make a difference,” wrote Madhuri Dixit 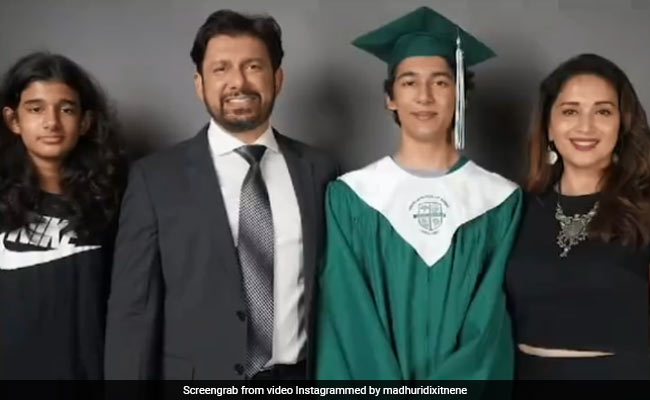 Madhuri Dixit and her husband Shriram Nene are “proud parents” as their son Arin Nene “graduates from high school with flying colors” (Madhuri’s words). On Sunday, Madhuri Dixit  posted a video on her Instagram profile, which had pictures from her son Arin’s high school graduation day, which took place virtually. An excited Madhuri wrote in her caption:”A proud moment for Ram and I, as Arin graduates from high school with flying colors. Congratulations Arin and to the graduating class of 2021. We appreciate how hard this year has been for all of you and we salute your resilience, strength, hardwork and focus to rise above the situation and succeed. So, follow your passion and understand that one day you will have the power to make a difference, use it well. Wishing you success in everything you do. Love you always.”

The actress accompanied the post with the hashtags #ProudParent, #ClassOf2021 and #GraduationDay. See the post shared by Madhuri Dixit:

Last week, Shriram Nene shared a picture with son Arin and he wrote: “Sneak peek, right. So proud! Thanks to ASB and all the teachers and everyone!”

Madhuri Dixit stays with her family in Mumbai. She married Shriram Nene, a doctor, in the year 1999 and the couple are parents to two sons – Arin and Raayan.

Madhuri Dixit will soon be making her debut in the digital world with Netflix’s upcoming series, which will be produced by Karan Johar. The actress has previously collaborated with Netflix for a Marathi drama titled 15th August, which was her debut project as a producer. In terms of films, she was last seen in the 2019 period drama Kalank, co-starring Alia Bhatt, Sanjay Dutt, Aditya Roy Kapur and Sonakshi Sinha. During the lockdown last year, she released her first single titled Candle.