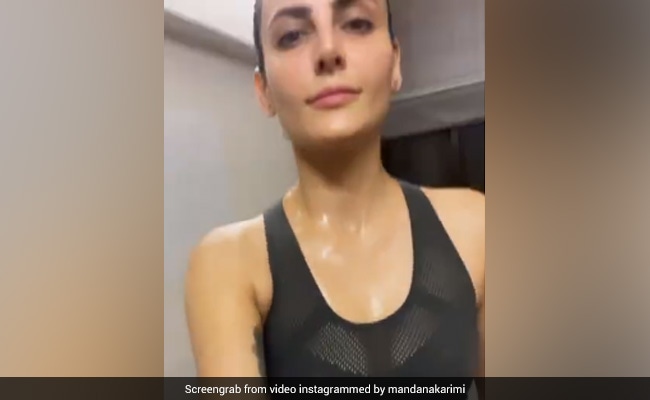 Mandana Karimi in a still from the video.(Image courtesy: mandanakarimi)

The pressure to look perfectly flawless on social media is a challenge that many of us struggle with every day. Often, women and men of all ages feel the need to hide their acne, stretch marks or uneven body fat behind filters or edit their pictures to fit into the societal frameworks on an ideal body. However, breaking this illusion of perfection is the beautiful actress, Mandana Karimi. On Instagram, Mandana shared a video of herself sweating it out on an exercise bicycle in her workout clothes. Keeping it real, the actress who often shares stunning pictures of her fit physique, showed off her bloated stomach in her latest post.

Despite being fit, it is normal to have days when your body looks bloated, or your face looks slightly swollen, she said. In the caption, Mandana wrote, “I scroll down my newsfeed and look in awe of these beautiful women who don’t look as if they have a single flaw! I normally receive such wonderful praise and support from people through my workout videos which are so lovely and I’m so grateful. But nobody is perfect and I’ve always kept it real with you all. When I say I’m bloated….. I’m bloated. It happens when I eat certain foods or at that time of the month. Relax and be happy. It’ll be okay, you’re not alone. Promise.”

Recently, Mandana also gave her social media followers some major self-love goals by sharing a photo of herself in a bikini. Sharing the image, she wrote, “What to do when it’s pouring outdoors? Well, ROCK that bikini which you couldn’t wear in Goa.”

We also love this post where the actress spoke about accepting ourselves with all our flaws. Sharing a video of herself, she wrote, “Yes filter? No filter? Well do what’s best works for you..stop judging if you don’t like being judged, remember change starts from you.“ That’s a major self-love tip to swear by, isn’t it?

In another post that could very well double up as an important life lesson, she wrote, “The trick is to be thankful when you are doing good & graceful when you hit the rock bottom.“

Mandana Karimi rose to national fame with her stint in the reality show Bigg Boss. She has featured in Bollywood films such as Kyaa Kool Hain Hum 3, Main Aur Charles, Bhaag Johnny and Roy. She also appeared as an antagonist in the popular TV show Ishqbaaz.