Mother’s Day 2021: Here is a look at what Mark Zuckerberg, Jeff Bezos and others shared on Mother’s Day. 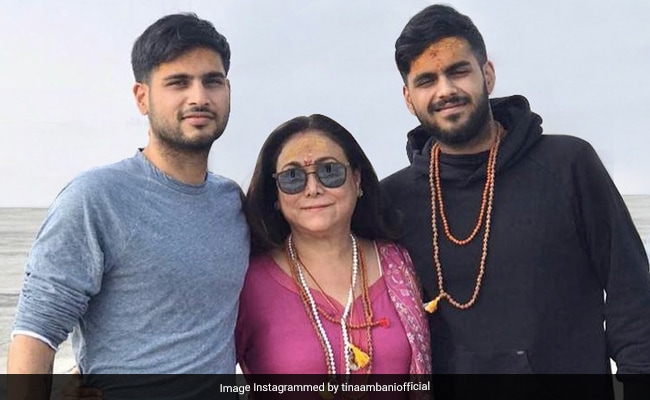 Tina Ambani with her sons in a picture shared on the occasion of Mother’s Day.


As people across the world celebrated Mother’s Day yesterday, social media was flooded with the sweetest posts. Several celebrities and noted personalities also took to social media to express their gratitude to mothers and mother figures in their life. From billionaire entrepreneurs like Mark Zuckerberg and Jeff Bezos to Bollywood stars like Kareena Kapoor and Priyanka Chopra, several celebs shared Mother’s Day tributes on Instagram. Take a look:

Facebook founder Mark Zuckerberg shared a picture of wife Priscilla Chan and their two daughters on Mother’s Day. The picture shows Priscilla being kissed by the two girls as she smiles for the camera. “Happy Mother’s Day to Priscilla, to my wonderful mom, and to all the moms out there!” Mark Zuckerberg captioned the picture.

Amazon’s Jeff Bezos took a trip down memory lane on Sunday. He shared a throwback photo of himself and his siblings with their mother, Jacklyn Bezos, next to a more recent one of the family together. “To a mom who always had her hands full. Thank you for absolutely everything. We love you, Mom!” wrote Jeff Bezos.

Melinda Gates also shared a Mother’s Day post on Sunday – a few days after she and her husband, Bill Gates, announced they were splitting up. Melinda Gates shared a picture with their three children and wrote: “I love being their mother. To anyone celebrating a mom or a mother figure, honoring a memory of someone you loved, or reflecting on your own resilience today, I hope your day is a meaningful one.”

Tesla and SpaceX chief Elon Musk did not share a Mother’s Day tribute on social media – he did one better. Elon Musk invited his mother Maye Musk to join him as he hosted ‘Saturday Night Live’ – and promised her a dogecoin as a Mother’s Day gift. Maye Musk later shared a pic from their SNL appearance on Instagram and wrote: “Happy Mother’s Day to mothers all over the world.
Still smiling from the fun time I had on stage with Elon.”

Closer home, Tina Ambani shared a Mother’s Day post for her mother-in-law as well as her mother. “The warmest place in the world is a mother’s embrace; a source of incredible comfort and the purest, most elemental love,” she wrote, sharing three pictures on Instagram. The first one shows her with her sons, Anmol and Anshul, and the other two feature her mother and her mother-in-law, Kokilaben Ambani. “Gratitude and love to my two mothers today – and every day,” said Tina Ambani.

Meanwhile, Priyanka Chopra’s Mother’s Day post came with a hilarious quote.
“I do what I want, where I want, when I want…. if my mom says it’s ok,” the actress wrote. She shared a picture of mom Madhu Chopra alongside a picture of her mother-in-law Denise Jonas and added: “I’m so blessed to look up to two incredible women who lead by example everyday. Love you.”