About 12% of global trade goes through the canal, making it so strategic that world powers have fought over the waterway since it was completed in 1869. 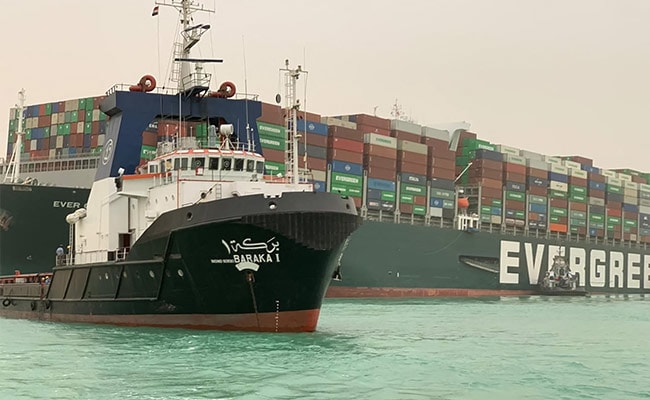 MV Ever Given ran aground in the Suez Canal after a gust of wind blew it off course. (AFP)


Tugs and diggers have so far failed to dislodge a massive container ship stuck in the Suez Canal on Wednesday, increasing the chances of prolonged delays in what is arguably the world’s most important waterway.

Work to re-float the ship was suspended until Thursday morning in Egypt, shipping agent Inchcape said, citing the Suez Canal Authority. Dredgers are still trying to loosen the vessel before any attempt to pull it out, the ship’s manager said.

It’s taxing to even grasp how big this ship is. About a quarter mile long (400 meters) and weighing in at 200,000 metric tons, its sheer size is overwhelming the efforts to dig it out. A huge yellow excavator, itself about twice as tall as its driver, looked like child’s toy parked next to the ship’s bulking bow.

The situation has gotten so desperate that an elite salvage squad is due to arrive Thursday to work on prising the Ever Given from the bank of the canal, where it’s blocking oceangoing carriers that haul everything from oil to consumer goods.

Still, the best chance for freeing the ship may not come until Sunday or Monday, when the tide will reach a peak, according to Nick Sloane, the salvage master responsible for refloating the Costa Concordia, the cruise ship that capsized on the coast of Italy in 2012. Sloane works as the senior salvage master for Fort Lauderdale, Florida-based Resolve Marine Group.

UPDATE: The giant ship that blocked the Suez Canal has now been moved alongside the bank of the waterway, potentially easing the disruption to the trade route https://t.co/CI0Zrw1Cq3pic.twitter.com/8MskJT43RW

About 12% of global trade goes through the canal, making it so strategic that world powers have fought over the waterway since it was completed in 1869. For now, all that traffic is backed up with the Ever Given aground in the southern part of the canal, creating another setback for global supply chains already strained by the e-commerce boom linked to the pandemic.

“The Suez Canal blockage comes at a particularly unhelpful time,” said Greg Knowler, European editor at JOC Group, which is part of IHS Markit Ltd. “Even a two-day delay would further add to the supply chain disruption slowing the delivery of cargo to businesses across the U.K. and Europe.”

The incident began on Tuesday when strong winds blasted through the region and kicked up sands along the banks of the 120-mile-long canal, which connects the Mediterranean in the north with the Red Sea in the south. The waterway is narrow — less than 675 feet wide (205 meters) in some places — and can be difficult to navigate when there’s poor visibility.

But Ever Given stayed its course through the canal, on its way to Rotterdam from China. As gusts that reached as high as 46 miles an hour swept up dust around it, the crew lost control of ship and it careened sideways into a sandy embankment, blocking nearly the entirety of the channel. It’s still in the same position as when it ran aground, according to Inchcape.

At the heart of all of this is the ship’s massive scale.

Container vessels have nearly doubled in size in the past decade as global trade expanded, making the job of moving such ships much harder when they get stuck.

Even while key routes — including the Suez Canal — have been widened and deepened over the years to accommodate the mega-sized vessels, the work to dig them out after they get stuck takes enormous power.

The struggle to dislodge the ship is now falling to SMIT Salvage, a legendary Dutch firm whose employees parachute themselves from one ship wreckage to the next, saving vessels often during violent storms. This ship is so heavy that the salvors may have to lighten it by removing things like the ballast water, which helps keep ships steady when they’re at sea. Fuel could also be unloaded.

The canal is among the most trafficked waterways in the world, used by tankers shipping crude from the Middle East to Europe and North America, as well as in the opposite direction. On Wednesday 185 vessels, mostly bulk carriers, container ships, and oil or chemical tankers, were waiting to cross the canal, according to shipping data compiled by Bloomberg.

The blockage highlights a major risk faced by the shipping industry as more and more ships transit maritime choke points including the Suez, Panama Canal, the Strait of Hormuz and Southeast Asia’s Malacca Strait. Such occurrences could become more common as ships get bigger and waterways get more congested.

Oil companies are starting to prepare for the worst. On Wednesday, there was an uptick in interest from oil companies looking to book tankers with options to avoid the canal, according to a broker, and several bid for space on the pipelines that allow bypass of the waterway completely. For now, that’s a just-in-case move. Container ships will most likely have to wait it out, as the main alternative is the unattractive option of sailing around the southern tip of Africa.

The disruption comes at a time when oil prices were already volatile. Crude surged above $70 a barrel earlier this month on Saudi production cuts, only to slump close to $60 this week due to setbacks in Europe’s coronavirus vaccine program. Brent crude rose more than 5% on Wednesday.

Ever Given’s crew are safe and accounted for, and there have been no reports of injuries or pollution, according to the ship’s manager, Bernhard Schulte Shipmanagement. The vessel is carrying cargo for logistics company Orient Overseas Container Line Ltd., according to Mark Wong, a spokesman for OOCL.