“In all these years, nothing has come easy to me,” says Zoya Agarwal 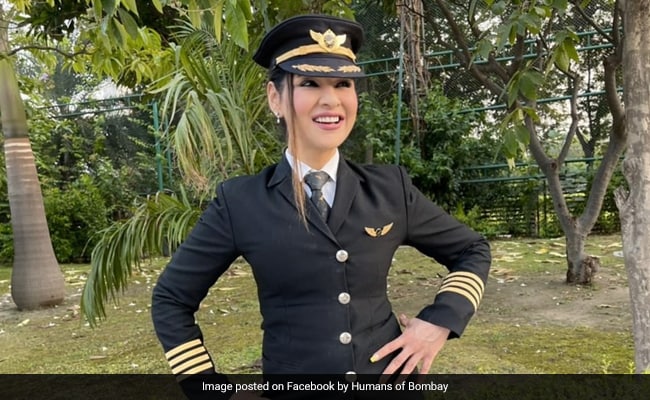 
An all-women cockpit crew created aviation history in January this year by flying the world’s longest air route. Now, Air India Captain Zoya Agarwal, who commanded the San Francisco to Bengaluru flight, has spoken to Humans of Bombay about her childhood dream of becoming her pilot, how she worked to achieve it and how she made history as the first woman in the world to fly across opposite poles.

“In the 90s, growing up as a girl in a lower middle class family meant that you weren’t allowed to dream beyond your means,” says Ms Agarwal. Still, at the age of eight, she knew she wanted to become a pilot. “I’d go to the terrace, look at the aeroplanes in the sky and wonder, ‘Maybe if I was flying one of those planes, I could touch the stars,” she says.

Initially, she was hesitant about telling her parents of her dream – especially when she overheard her mother saying that Zoya would have to be married off into a good family when she grew up. However, Ms Agarwal says she “couldn’t hold back” after completing 10th grade and told her parents she wanted to become a pilot. While her mother started crying, her father worried about the expense of pilot training.

Still, she defied their wishes and took up Science in Class 11 and 12. “I excelled in my 12th boards and took up Physics for graduation,” says Ms Agarwal. Alongside, she applied for an aviation course – paid for by the money she had saved up over the years.

For three years, Zoya Agarwal would attend college and then run off for her aviation course in the other part of the city. She would reach home only around 10 pm, and then sit down to complete her assignments.

“When I topped college, I went to Papa and asked, ‘Now, will you allow me to pursue my dream?’ Hesitantly, Papa agreed to take a loan to pay for my course. I put my heart and soul into it and excelled,” she says.

Even so, she she had to wait two years for a job opportunity – but one finally came in the form of Air India’s vacancy for seven pilots, for which Ms Agarwal competed against 3,000 others and managed to emerge with an offer letter in hand. It wasn’t that straightforward as this, however. Ms Agarwal remembers that four days before her interview round, her father had a heart attack.

At his behest, she reluctantly agreed to go to Mumbai and take her exam. “There, I cleared all rounds and joined Air India as a First Officer! In 2004, I flew my first flight to Dubai-I’d finally touched the stars!” Ms Agarwal tells Humans of Bombay.

After that, there was no turning back for the pilot. She paid off her father’s loans and bought diamond earrings for her mother. During the pandemic, Ms Agarwal even volunteered to lead rescue operations.

This year, Zoya Agarwal added another feather to her cap when she commanded flight AI176, which covered the longest aerial distance between San Francisco and Bengaluru. The pilot flew over the North Pole and took the Atlantic route to reach Bengaluru.

“I led the first all-women cockpit to fly the world’s longest air route,” she says. “On 9th January 2021, I became the first woman in the world to fly across opposite poles.”

After the successful completion of the 17-hour flight, Ms Agarwal and other crew members were welcomed at the airport with banners and applause from the Air India team.

Since the flight, she has also received letters from women she has inspired.

On Facebook, the post documenting her journey has racked up nearly 10,000 ‘reactions’ and hundreds of comments and ‘shares’.

“You are an inspiration! I hope other girls follow their dreams as well!” wrote one person in the comments section. “You are a true asset to your family and to the country!” said another.

“In all these years, nothing has come easy to me,” says Ms Agarwal. “But whenever I felt stuck, eight-year-old Zoya’s dream flashed before my eyes – she had the courage to follow her heart and that’s how I want to be, all my life.”