“This is a morphed image doing the rounds since 2015,” said Aviation Minister Hardeep Singh Puri 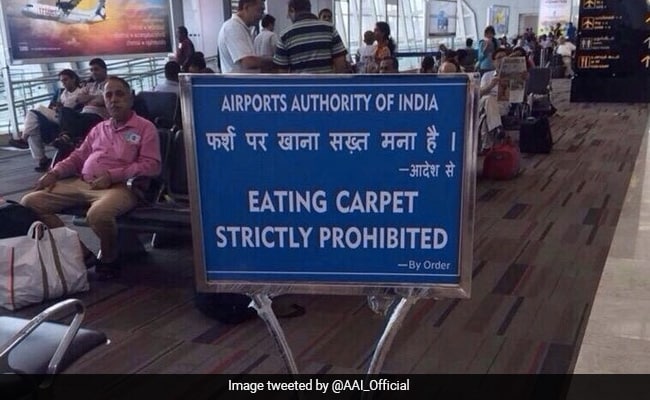 
Aviation Minister Hardeep Singh Puri on Wednesday tweeted a clarification after an old image of a ‘mistranslated’ airport sign began doing the rounds of the Internet again, flagging it as fake. “Listen people. This is a morphed image doing the rounds since 2015,” Mr Puri tweeted, sharing photos of the sign in question. He further said that the Airports Authority of India (AAI) had issued a clarification on the morphed sign in 2019 as well, when it had resurfaced on social media.

The aviation minister’s recent clarification on the sign came after the image was shared by a Twitter user this week, who suggested that the AAI needed Congress leader Shashi Tharoor’s help to correct the language on the sign.

Responding to the now-deleted tweet, Mr Tharoor had said, “They are incorrigible” – as a screenshot shared by Mr Puri shows.

“Let us all do a bit of due diligence before putting such things out,” the aviation minister urged in his tweet. “Fake images and morphed pictures don’t do any good to people who are posting them.”

Listen people.
This is a morphed image doing the rounds since 2015.
It resurfaced in 2019. AAI had pointed this out even then.

Let us all do a bit of due diligence before putting such things out.
Fake images & morphed pictures don’t do any good to people who are posting them. pic.twitter.com/JLKkyT5Fcm

According to news website UPI, the sign was actually photographed back in 2015 by businessman Justin Ross Lee, who had shared it on Facebook. According to his post, the picture had been taken at Chennai International Airport.

In 2019, actress Shabana Azmi had also shared a photo of the airport sign on Instagram, after which the AAI had pointed it out as fake. “Since 2015, this morphed image shown has been doing rounds time and again. Requesting everyone not to circulate any such photographs without proper fact-checking,” the Airports Authority of India said in its tweet at the time.

3 Odisha Districts Likely To Be Worst Hit By Cyclone Yaas:...