UP Police have filed a counter case – of their own volition – against the victim, Mohammed Shakir, who has been accused of ‘mischief by killing an animal’ 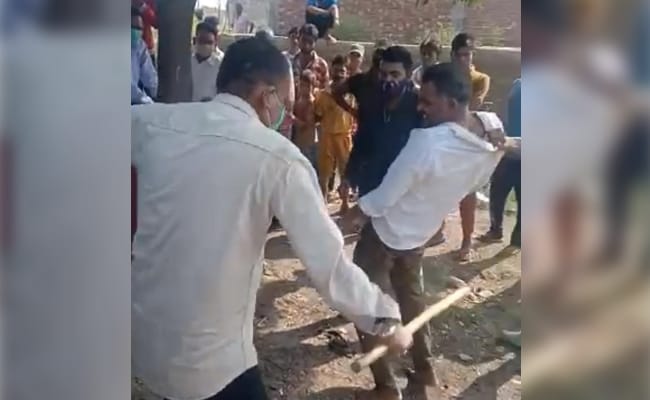 The victim, Mohd Shakir, is currently recovering at home, his family has confirmed to NDTV

A Muslim man in the business of transporting and selling meat was assaulted Sunday afternoon in western Uttar Pradesh’s Moradabad district by a group of men led by a person calling himself a “gau rakshak (cow vigilante)”.

UP Police have booked the men who carried out the assault – based on a complaint by the victim’s brother. However, they have also filed a counter case – of their own volition – against the victim, who has been identified as Mohammed Shakir.

The counter case invokes IPC sections relating to ‘mischief by killing an animal’, ‘committing an act likely to spread infection’, and ‘violation of Covid lockdown guidelines’.

A senior police official – a Deputy Superintendent – posted in the area told NDTV Shakir had been arrested but not jailed as the sections invoked against him are ‘bailable’.

Shakir is currently recovering at home, his family has confirmed to NDTV.

The man who led the assault against Shakir – Manoj Thakur – has not been arrested yet.

“We got a video of a meat-seller being beaten up and we have filed a case. There are five to six accused who have been named. We are carrying out searches and will arrest them soon,” Prabhakar Chaudhary, the Moradabad police chief, said in a statement.

The incident took place in a village located within the Katghar Police Station limits in Moradabad.

In a written complaint to the police Shakir’s brother said he had been accosted by Manoj Thakur and his associates while carrying 50 kg of buffalo meat on a scooter.

The FIR says the vigilantes demanded Rs 50,000 from Shakir and then proceeded to assault him, before threatening him against going to the police.

Visuals from a mobile phone Shakir surrounded by Thakur and other men. Thakur then attacks Shakir with a lathi till he falls to the ground. A longer video shows Shakir held by a few men as he argues with Thakur, asking to be released.

As the police search for the assaulters, Manoj Thakur issued a statement from an undisclosed location that has been circulated to journalists in the district.

“We tried to stop this man but he hit us with his vehicle. Using two lathis to hit a man is a crime but trying to kill someone isn’t? I am trying to stop cow slaughter but the police are now threatening me. Let the administration give me a police team… I will expose this racket,” he said.

The incident has triggered outrage and the local Samajwadi Party MP has demanded action.

“I heard he got the meat from a factory and had a receipt. Yet he was assaulted. I want to say that this hatred in the name of cow slaughter has to stop. It is God’s grace this man was not killed,” ST Hasan, the MP from Moradabad, said in his statement.