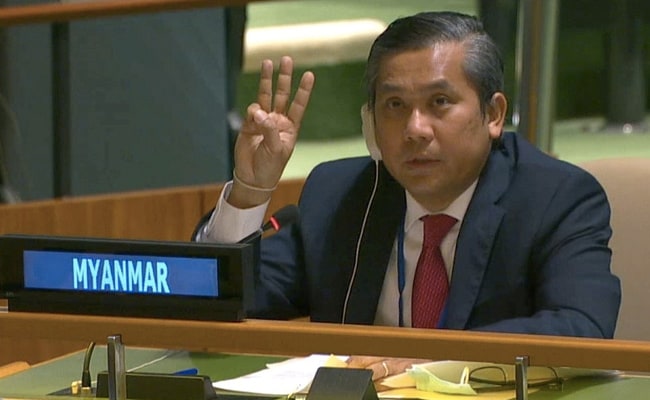 “Time is of the essence for us,” Ambassador Kyaw Moe Tun said. (File)

Myanmar’s envoy to the United Nations, who has rebelled against the junta, on Friday urged a no-fly zone, arms embargo and targeted sanctions in a passionate plea for action.

“Time is of the essence for us,” he said. “Please, please take action.”

He voiced regret so far at the “lack of adequate and strong action by the international community, especially the UN Security Council.”

The envoy, appearing virtually with the flag of Myanmar behind him, said that the junta has deliberately been targeting civilians and he voiced anguish over the deaths of children.

“A no-fly zone should be declared,” he said, “to avoid further bloodshed caused by the military air strikes on civilian areas.”

“No doubt that these acts are not acceptable to all of us in this modern world,” he said.

“I strongly believe that the international community, in particular the UN Security Council, will not let these atrocities keep going on in Myanmar.”

He also called for an international arms embargo and the freezing of bank accounts associated with members of the military and their families.

All foreign direct investment should also be suspended until the restoration of the democratically elected government, the ambassador said.

This Malaysian Schoolgirl Is Using TikTok To Challenge School Abuse