“So far, the engineering telemetry we have received and analyzed tell us that the flight met expectations,” said Bob Balaram, Ingenuity’s chief engineer at NASA’s Jet Propulsion Laboratory in southern California. 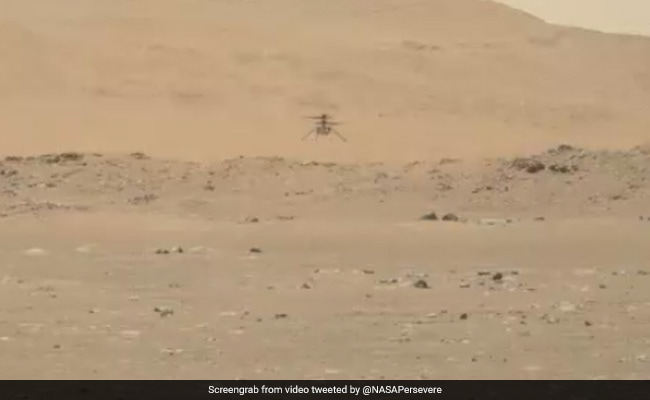 NASA successfully carried out a second flight on Mars on Thursday of its mini helicopter Ingenuity, a 52-second sortie that saw it climb to a height of 16 feet (five meters).

“So far, the engineering telemetry we have received and analyzed tell us that the flight met expectations,” said Bob Balaram, Ingenuity’s chief engineer at NASA’s Jet Propulsion Laboratory in southern California.

“We have two flights of Mars under our belts, which means that there is still a lot to learn during this month of Ingenuity,” Balaram said in a statement.

#MarsHelicopter Flight #2 is in the books! I’ve captured its higher, bolder flight, and I’ll be sending back all my latest frames soon. Meanwhile, here’s a quick preview, including takeoff and two turns. pic.twitter.com/MmNOuIQ8ly

The US space agency conducted the first flight of the four pound (1.8 kilogram) rotorcraft on Monday, the first powered flight ever on another planet.

That time Ingenuity rose to a height of 10 feet and then touched down after 39.1 seconds.

For the second flight, which lasted 51.9 seconds, Ingenuity climbed to 16 feet, hovered briefly, tilted and then accelerated sideways for seven feet.

“The helicopter came to a stop, hovered in place, and made turns to point its camera in different directions,” said Havard Grip, Ingenuity’s chief pilot. “Then it headed back to the center of the airfield to land.

“It sounds simple, but there are many unknowns regarding how to fly a helicopter on Mars.”

Data and images from the flights are transmitted 173 million miles (278 million kilometers) back to Earth where they are received by NASA’s array of ground antennas and processed.

Ingenuity traveled to Mars tucked under the belly of the Perseverance rover, which landed on the Red Planet on February 18 on a mission to search for signs of past microbial life.

Ingenuity’s goal, by contrast, is to prove its technology works.

Ingenuity’s flights are challenging because of conditions vastly different from Earth’s — foremost among them a rarefied atmosphere that has less than one percent the density of our own.

This means that Ingenuity’s rotors, which span four feet, have to spin at 2,400 revolutions per minute to achieve lift — about five times more than a helicopter on Earth.

Because of the distance from Earth, it can’t be piloted by a human. While its main maneuvers are pre-programmed, Ingenuity needs to make some real time decisions using data from its sensors and camera.

It also needs to run a heater to survive nighttime temperatures that plunge to minus 130 degrees Fahrenheit (minus 90 degrees Celsius).

NASA is already preparing to send Dragonfly, a much larger rotorcraft-lander, to Saturn’s icy moon Titan where it will fly multiple sorties in search of extraterrestrial life when it reaches there in 2034.