“Every single day, he wins my heart,” wrote Neha for Rohanpreet. Aww 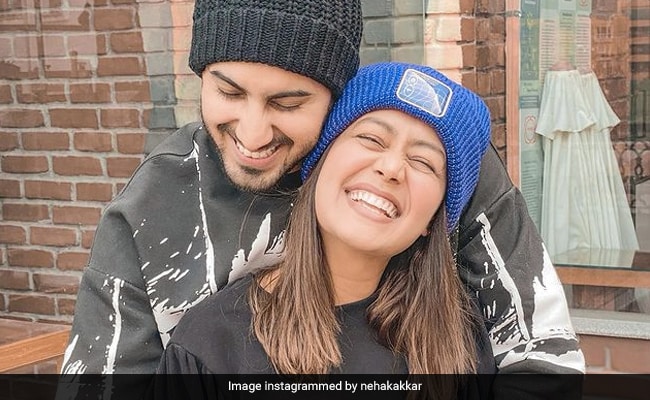 Neha Kakkar and Rohanpreet Singh celebrate their six-month anniversary today. The couple got married on October 24 last year. On Saturday, Neha Kakkar shared a bunch of loved up pictures of herself and Rohanpreet and called him “the best husband ever,” who still “wins her heart” every single day. In the photo, the couple can be seen sporting winter outfits and laughing with all their hearts. “Every single day he wins my heart. He makes me fall in love with myself even more… Everyday! He says he loves me more than I love him but I wanna say I love him a lil more! Hehe…,” Neha Kakkar wrote in her caption and added: “Rohanpreet, you’re genuinely the best husband ever! I’m really lucky! Happy 6 Months, My Lifeyyyy!” Aww.

Rohanpreet also posted similar pictures on his Instagram profile, one of which is the current wallpaper of his mobile phone. He wrote: “Hey guys, today I wanna share my wallpaper with you all and this girl in the wallpaper I don’t have words to describe how beautiful this girl is.. in and out both!! She is a creator, like how God created this world, similarly she created my world, our world and it’s so beautiful! Still can’t believe she’s mine. She’s the one that I can’t live without. I wanna say “Thank You” for every single thing you brought in my life and hey my person, happy 6 months to us!! my wifey Neha Kakkar.”

Neha Kakkar and Rohanpreet had an intimate wedding in Delhi on October 24, where Neha wore a Sabyasachi lehenga for the daytime ceremony and a gorgeous blood-red lehenga by designer duo Falguni and Shane Peacock for the night party.

Neha Kakkar has sung tracks like Dilbar redux, Manali Trance, Kala Chashma, Aankh Mare redux from Simmba, among many others. She was last seen in a guest appearance in the Netflix film Tuesdays and Fridays. Rohanpreet Singh is known for participating in wedding reality show Mujhse Shaadi Karoge. He also appeared in the musical reality show India’s Rising Star and was the first runner up in the second season.