The video resurfaced on social media yesterday with captions attributing the damage to Cyclone Tauktae. 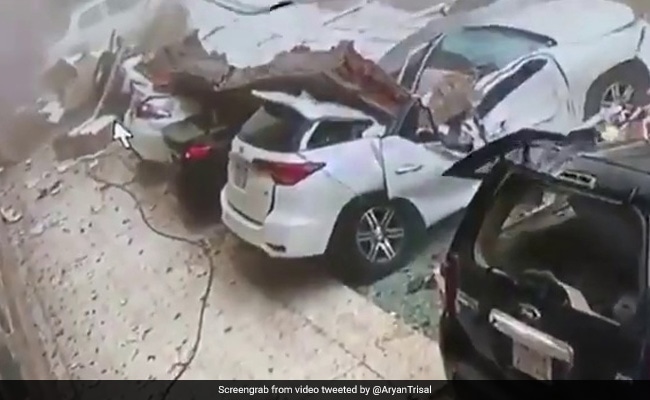 Viral footage shows a slab of concrete falling on parked vehicles and damaging them.


A video of a slab of concrete falling on parked cars is being widely circulated on social media as surveillance footage from Mumbai’s Trident Hotel – but a simple reverse image search reveals otherwise. The video, which shows huge chunks of building material falling on parked cars and smashing their roofs, resurfaced on social media yesterday with captions attributing the damage to Cyclone Tauktae.

Cyclone Tauktae, intensifying into an “extremely severe cyclonic storm”, swept the coastal regions of Maharashtra on Monday. State capital Mumbai witnessed heavy showers and strong winds throughout the day. In the midst of this, several videos that purportedly shows the destruction caused by the cyclone emerged on social media – and at least one of them has nothing to do with Mumbai.

The video of alleged damage to Trident Hotel has been widely shared over messaging platforms and on social media platforms like Twitter, where many users said it was filmed at the South Bombay hotel. Take a look at the footage:

With the wind speed of 70 to 90 kilometre per hour this is what happened outside hotel Trident Nariman point Mumbai pic.twitter.com/7EdyCnY5e1

While many have re-tweeted and shared the video after taking the caption at face value, breaking the video into keyframes and doing a reverse image search reveals that the footage has actually been doing the rounds of the Internet for almost a year. It was posted on YouTube in 2020. “Watch the moment of a man’s survival after a wall fell on a number of cars in Medina due to strong winds and rain,” read the caption.

The video was actually filmed in Medina in Saudi Arabia last year after torrential rainfall damaged vehicles and knocked down trees. An Al Jazeera article from July 2020 also features the video.

AIR News Mumbai also took to Twitter to clarify that reports of structures falling on vehicles near Trident Mumbai are false.

#FactCheck : No incident of tree/structure fall on vehicles is reported near #Trident hotel in #Mumbai. Video circulating on social media is false. Our correspondent reports that, incident was reported at some other place. @MumbaiPolice@mybmc
#cyclonetaukate@AUThackeraypic.twitter.com/Jg52IuD0Aj

It is clear, therefore, that the clip was not filmed in Mumbai recently, but in Saudi Arabia in 2020.

Cyclone Tauktae, the biggest to hit the region in decades, made landfall in Gujarat at around 8.30 pm on Monday, packing winds with speeds of 155-165 kilometres per hour, gusting to 190 km/hour.