“Shy? Never heard of her,” read a part of Priyanka Chopra’s post 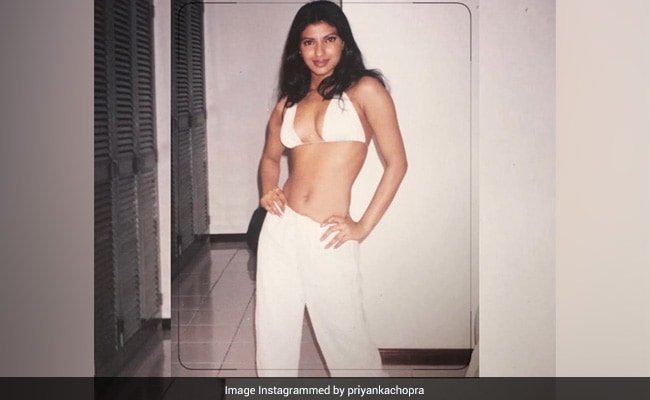 Ever heard the words shy accompanying anything to do with Priyanka Chopra in the same sentence? No nah. She neither. The 38-year-old global icon took a trip down memory lane and fished out the perfect Throwback Thursday treat. Priyanka Chopra, who started modelling as a teenager and was crowned Miss World at the age of 18, shared a photo of her younger self from many moons ago. In the throwback gold, Priyanka sports an all-white look – white trousers paired with a white bikini top. In sync with retro fashion, Priyanka can be seen sporting a bindi in the photo. “Bindis and bikinis,” she added in a hashtag.

The post just need a sassy caption and Priyanka had one. “Shy? Never heard of her,” is what she wrote. We like. Take a look at Priyanka Chopra’s Throwback Thursday post here:

PS – Priyanka Chopra is still in love with swimsuits and bindis as she was earlier:

Earlier this year, shared this photo of her “lean, mean and all of 17” self. Sometime around a year after this photo was clicked, Priyanka won Miss World in 2000 when she was just 18, marking the 5th Miss World win from India.

In terms of work, Priyanka Chopra is one of the busiest stars – she recently launched her memoir Unfinished. She was last seen in Netflix film The White Tiger. Priyanka also had a new Hollywood release in We Can Be Heroes. Priyanka Chopra recently completed the shooting schedule of her new movie Text For You in London. She also She recently appeared on Oprah Winfrey’s talk show Super Soul. Her upcoming projects also include the fourth Matrix movie.