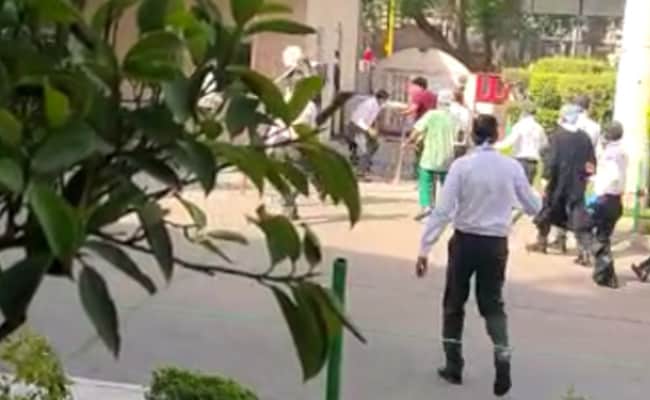 Doctors at a Delhi hospital were attacked Tuesday morning by the attendants of a woman, 67, who died in the emergency ward after her admission to the ICU was delayed due to a lack of beds.

An unspecified number of doctors were injured in the clash outside Apollo Hospital in the national capital, which took place between 8 and 10 am. The police arrived an hour later – around 11 am.

The doctors have since been recalled by the hospital because of the sheer number of patients requiring medical treatment and care, as the city and country battles a devastating Covid wave.

Shocking visuals of the incident show a group of men fighting just inside the hospital gates.

A masked man in a gray shirt can be seen furiously attacking another (in a yellow shirt) with a lathi as three or four others – who seem to be security personnel – try to detain him. As the 27-second video plays out, the man in the yellow shirt runs away with his attacker in hot pursuit.

The video then focuses on a second clash.

Two men – one in a red shirt and the other in a white shirt – can be seen trading punches and kicks.

A larger group, including one person who is dressed like a hospital attendant and the lathi-carrying attacker from the first fight, then rushes forward as utter chaos reigns.

The group then breaks up as two or three men, presumably the attackers, disengage and run away. A woman’s voice can be heard saying: “Maaro usko, sahi baat hain (Hit him, that’s right).”

Delhi, like other parts of the country, is battling a devastating wave of Covid infections that has brought the city’s health infrastructure to its knees.

Hospital beds, medication and oxygen supplies are at a premium, with people forced to rely on social media for aid or, worse, camp on the streets with critically ill relatives and hope for help.

On Monday the city recorded 380 COVID-19-linked deaths – the most ever in a 24-hour period.

It was the fifth day Delhi recorded over 300 deaths due to the coronavirus.

There were also over 20,000 new cases – the fifth day daily cases had crossed that mark.