Hesitation was visible on the face of a man who was hurrying out of the station when he was stopped by a healthcare worker asking him to take the COVID-19 test before leaving. 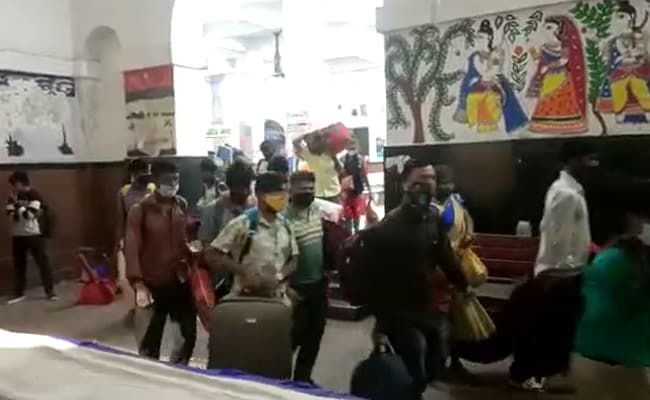 Dozens of people, some with young children, were seen rushing out of a railway station in an astonishing set of visuals from Bihar’s Buxar on Thursday. The reason for the mad scramble: a Covid test.

Hesitation was visible on the face of a man who was hurrying out of the station when he was stopped by a healthcare worker asking him to take the COVID-19 test before leaving.

Chief Minister Nitish Kumar recently announced that testing had been arranged at all the railway stations in Bihar to screen natives returning home from different parts of the country.

“This has become an everyday ritual,” said an official .

“When we stopped them from leaving, they started to argue. There were no policemen at the station during the incident. Later, one policewoman came and said she was helpless as she was alone,” said Jai Tiwari, a local civic councillor in Buxar.

Trains from coronavirus-hit Mumbai, Pune and Delhi have been arriving in the state daily carrying a large number of migrant workers returning home due to joblessness or fearing a lockdown.

Amid a record rise in COVID-19 cases in the country, cities like Mumbai, Pune and Delhi are among the worst hit.

The country had last year witnessed an exodus of migrant workers from big cities after a nationwide lockdown was enforced at a few hours’ notice in the last week of March.

The Bihar Chief Minister held a high level meeting on Friday discussing steps taken so far to check the spread of the virus amid a substantial rise in the number of infections on a daily basis. The state reported 6,253 fresh COVID cases and 13 new deaths on Thursday, taking the total caseload to over 3 lakh,