The incident took place on Saturday at the district hospital in Mahoba, 250 km from Lucknow. After outrage, an enquiry has been ordered. 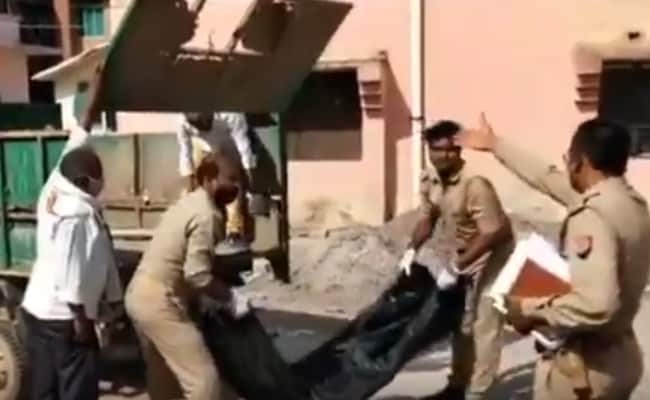 Disturbing visuals have emerged from Uttar Pradesh’s Mahoba district, where members of the local police unit have been filmed dumping the body of a 50-year-old man into a garbage truck for the journey to carry out his last rites.

The incident took place on Saturday at the district hospital in Mahoba, 250 km from Lucknow. After outrage, an enquiry has been ordered.

RK Gautam, a senior police official in Mahoba, said this morning he has instructed the concerned official to investigate the case within 24 hours.

A video shot on a mobile phone at the hospital’s mortuary shows two policemen carrying the man’s body in a black bag as a third cop, their senior, instructs them on how to load the body on the vehicle. The men are then seen dumping the body into the vehicle.

The 50-year-old man was a labourer in Delhi and had reportedly returned to his village a few days ago. “He had developed symptoms like weakness and fatigue, and we brought him here. But he died before he could be treated,” the man’s son told the media.

Sources in the local administration, however, also blamed the man’s family. It claimed the family had refused to take possession of the body after the postmortem at the district hospital and that relatives, including the son, had to be persuaded to first reach the hospital and then carry out the last rites.

It is the son who arranged for the garbage truck to transport the body, the sources claimed.