A woman suffered a head injury in the incident, said police. A case has been registered against unknown assailants on her complaint, it added. 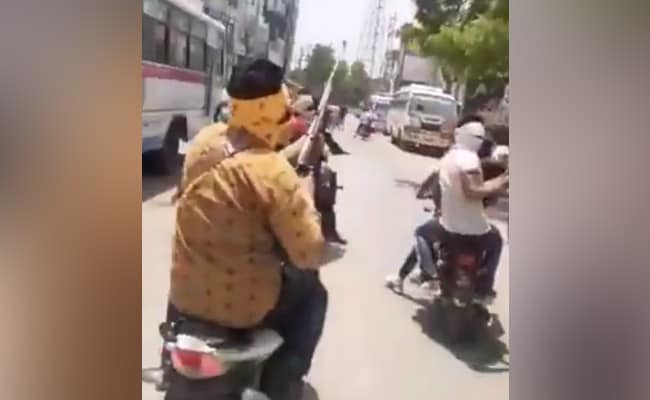 A few men have been arrested in the incident, said police

Dozens on men on motorbikes, their faces and head covered with a cloth, were seen firing guns and indulging in violence in Bankhandi Road area under Kotwali police station in Madhya Pradesh’s Morena.

A woman suffered a head injury in the incident, said police. A case has been registered against unknown assailants on her complaint, it added.

“We have arrested few of them and we are taking action against those who are involved. Nobody is above the law, we will take appropriate action against whosoever is responsible,” said Additional SP Dr Raisingh Narwaria.

The police said the incident was an act of retaliation to a similar incident a day ago by another community over an objectionable social media post.

#CoronaCurfew not in Morena! dozens masked riding mobikes openly firing targeting the other caste over a social media post! @GargiRawat@ndtv@ndtvindiapic.twitter.com/B7GG8tXAa1

The violence comes on the back of a “strict Janata Curfew” till May 15, as announced by Chief Minister Shivraj Singh Chouhan earlier this week. The Chief Minister also spotlighted the high positivity rate in the state that led him to make the decision.

“To break the chain of transmission of the coronavirus in the state, we have to completely shut everything till May 15 — strict ‘Janata Curfew’,” said Mr Chouhan.

“We can’t shut things for too long, but with more than 18% positivity, we can’t remain open,” he added.

The country is battered by a deadly second wave of coronavirus which has overwhelmed the hospitals. Most states have taken to lockdowns, or night curfews to cut the transmission chain.

"Home Is Where The Heart Is": Virat Kohli Never Wants To...

Indian-Origin Family In US Returns $1 Million Ticket To Woman Who...