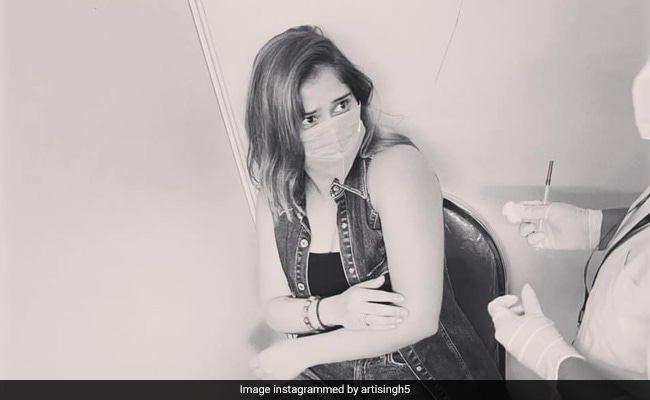 TV actress and former Bigg Boss contestant Arti Singh, who received the first dose of the COVID-19 vaccine on Tuesday, dropped pictures of herself getting vaccinated on Instagram. In the pictures, Arti Singh can be seen sporting a scared look on her face, prompting several social media users to troll her for her expressions. While some termed her “overacting ki dukaan,” others asked her if she was scared while getting a tattoo on her hand as well. In the caption of the post, Arti Singh shared about her fear of injections and also urged others to get their vaccine shots. “Scared of injections but do takeeeeeee it … we need to fight this ….. first dose done,” she wrote in the caption of the post.

The Bigg Boss 13 contestant’s post received several comments from Instagram users who criticised her for her reactions in the pictures. “Stop publicity for each happening,” commented an Instagram user while other one wrote: “Weren’t you scared while having that tattoo on your hand?”

Another TV star Asha Negi recently asked her fellow celebrities to “stop overacting,” in vaccination videos in a hilarious social media post. “To all the actors who are uploading their vaccination videos, yaar awareness ke liye thik hai but please itni overacting mat kiya karo, bohot annoying ho jaata hai (spreading awareness is fine but please don’t overact, it’s very annoying),” she wrote in her Instagram post. Although, she did not name any specific celebrity in her post, Asha Negi’s appeal to fellow celebrities to “stop overacting,” comes just a week after her Pavitra Rishta co-star Ankita Lokhande’s video went viral on the Internet.

In her video, Ankita Lokhande can be seen praying to avert her fear while getting the COVID-19 vaccine.

Former Bigg Boss contestant, Arti Singh is known for her work in TV shows like Maayka, Uttaran, Yeh Hai Mohabbatein, Waaris, and Udaan. After being a part of Bigg Boss 13, she also appeared as a guest in the 14th season of the show.

Opinion: So, No, Mr Modi Does Not Know How To Sweep...