Thousands of supporters from the Tehreek-e-Labbaik Pakistan (TLP) have blocked major intersections in cities throughout Pakistan this week, with two police officers killed in clashes with rioters. 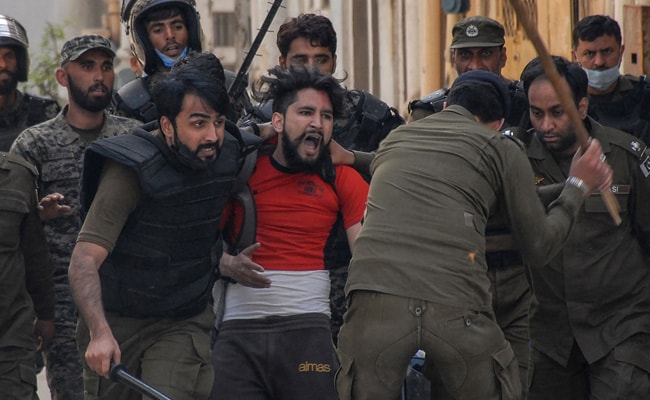 An extremist Pakistan political party responsible for paralysing swathes of the country with anti-France protests will be banned, a senior minister said Wednesday.

Thousands of supporters from the Tehreek-e-Labbaik Pakistan (TLP) have blocked major intersections in cities throughout Pakistan this week, with two police officers killed in clashes with rioters.

“We have decided to ban the TLP and the draft is going to the cabinet for approval,” Interior Minister Sheikh Rashid Ahmed told a news conference.

He said the party’s demands risked making Pakistan look like a “radical nation” to the outside world.

The TLP are notorious for holding days-long road protests over blasphemy issues, causing major disruption to the country.

But successive governments have a long history of avoiding confrontation with hardline Islamist groups, fearing any crackdown on religious parties could spark wider violence in the deeply conservative Islamic republic.

Dozens have been banned since the September 11 attacks in the United States, however, when Pakistan was under effective military rule and cracked down on radicals.

The latest protests erupted after the detention Monday of TLP leader Saad Rizvi, who has since been charged under anti-terrorism laws.

He was taken into custody hours after calling for a march on the capital to again demand the expulsion of the French ambassador.

The group has fanned Francophobia over the French government’s support for Charlie Hebdo magazine to republish cartoons of the Prophet Mohammed — an act deemed blasphemous by many Muslims.

“We are in favour of protecting the Prophet’s honour, but the demand which they are seeking could have portrayed Pakistan as a radical nation worldwide,” said minister Rashid Ahmed.

Rizvi is the son of a firebrand cleric and previous head of the TLP, Khadim Hussain Rizvi, who died in November after leading massive anti-France demonstrations.

During those protests, TLP supporters brought the capital to a standstill for three days that saw heavy street fighting and authorities cut mobile phone coverage in Islamabad and surrounding areas.

The demonstrations ended after a meeting between the government and party leaders, who claimed Islamabad had agreed to expel the French ambassador.

The government has never acknowledged details of any agreement.