Peru has registered more than 1.9 million infections to date, and has in recent months suffered acute shortages of oxygen to treat coronavirus patients. 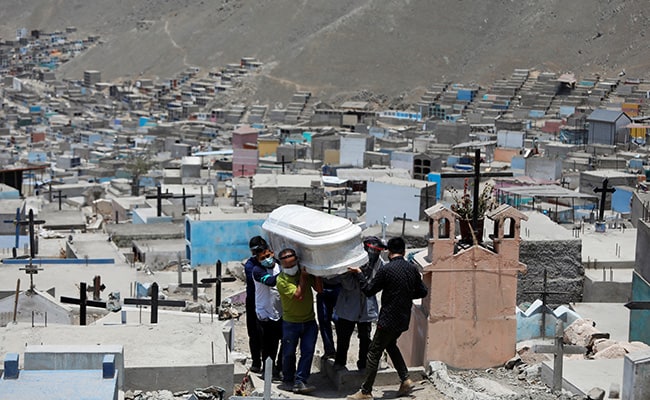 Peru now has the highest coronavirus mortality per capita of any country.

Peru on Monday more than doubled its official coronavirus death toll, becoming the country with the highest Covid-19 mortality per capita anywhere in the world.

The government said it had raised the count from 69,342 to 180,764 on the advice of a panel of health experts, which found there had been an undercount.

With the adjustment, Peru now has the highest coronavirus mortality per capita of any country, with 5,484 deaths per million inhabitants, according to an AFP count.

The country of about 33 million people previously ranked 13th in the world with 2,103 deaths per million, according to AFP’s data.

Hungary is in a distant second place with 3,077 deaths per million.

Peru has registered more than 1.9 million infections to date, and has in recent months suffered acute shortages of oxygen to treat coronavirus patients.

Prime Minister Violeta Bermudez said the toll was adjusted on the advice of a panel which suggested modifying Peru’s record-keeping criteria.

The panel said in a report the existing methodology generated “an under-representation in the number of deaths due to Covid-19.”

The criteria were broadened beyond people who tested positive for the virus to include “probable” cases with “an epidemiological link to a confirmed case.”

They will also now include people thought to be infected with the virus who present “a clinical picture compatible with the disease.”

The panel, convened in April, was composed of experts from public and private health entities in Peru and from the World Health Organization.

“Thanks to the work of this team… we will have more exhaustive figures and figures that will be very useful to monitor the pandemic and take the appropriate measures to confront it,” Bermudez said.

Peru started its vaccination campaign on February 9, but it has been slow and has so far reached five percent of the adult population with at least one shot.

The Andean nation has battled a second pandemic wave since December, with a record of almost 13,000 infections on April 1.

There are nearly 12,000 Covid-19 patients in hospital, but the health system has been able to breathe a little since the peak of 15,547 occupied beds recorded on April 20.

The adjustment of the death toll came six days before Sunday’s presidential runoff race between right-wing candidate Keiko Fujimori and leftist Pedro Castillo, both of whom have promised to speed up Peru’s immunization campaign.