Monday, August 15, 2022
Rajpostexam.com Single Spot For Worldwide Information And News
Home Trending News “Pockets Were Empty But Smile Was There”: Identify The Comedian In This...

“Clicking a photo was such a luxury in those days,” the caption read 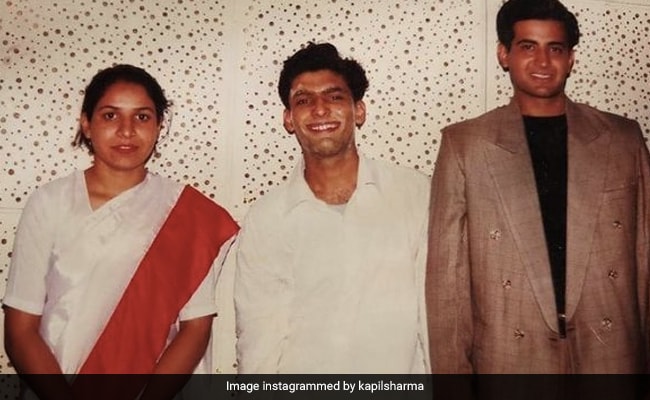 He posted this picture on social media. (Image courtesy: @kapilsharma)

Can you recognise a well-known comedian in this throwback picture? If you are still scratching your head, fret not, we will tell you that he is none other than Kapil Sharma. We found this picture on Kapil’s Instagram handle. On Wednesday night, the comedian, who hosts The Kapil Sharma Show, took us back to his college days in his latest Instagram upload. In the picture, Kapil can be seen posing in the middle along with his friends. The TV star looks unrecognisable in this picture that was clicked 23 years ago after his theatre performance in Guru Nanak Dev University, Amritsar. Kapil is sporting a crisp white shirt and has “gum” on his face. He is flashing his beautiful smile.

Kapil also wrote a heartwarming caption in his post. In his caption, the Kis Kisko Pyaar Karoon actor remembered his college life saying, “clicking a photo was such a luxury in those days that I didn’t even realize”. He added, “pockets were always empty but smile was always there”.

He wrote, “Just found this 23 years old pic, it was just after finishing the performance of our play #Azaadi” in the youth festival of Shri “Guru Nanak Dev University”. I removed my beard n clicked a photo with my colleagues, clicking a photo was such a luxury in those days that I didn’t even realize…gum is still there on my face… missing those days, pockets were always empty but smile was always there, just thought to share with u guys. Hope u all r well n safe #staysafe #stayhome #old #memories #college #hinducollegeamritsar #gurunanakdevuniversity #gndu #gnduamritsar.”

Kapil frequently shares his throwback pictures on his Instagram handle. In January, the comedian posted an old picture with his elder brother Ashok Kumar Sharma on the platform. He wrote, “Bhai bhai #memories #28 #years #old #pic.”

Born in Amritsar, Punjab, Kapil Sharma, the comedian, rose to fame after he won The Great Indian Laughter Challenge in 2007. He then worked in various TV shows like Comedy Circus, Jhalak Dikhhla Jaa Season 6, Chhote Miyan and Ustaadon Ka Ustaad. He launched his own comedy show titled Comedy Nights With Kapil in 2013. Now, Kapil Sharma hosts The Kapil Sharma Show.

Kapil Sharma is also an actor. He made his Bollywood debut in lead role with film Kis Kisko Pyaar Karoon in 2015. He was paired opposite Elli Avram, Manjari Phadnis, Simran Kaur Mundi and Sai Lokur. Kapil has also worked in films like ABCD 2, Firangi, Son Of Manjeet Singh, The Angry Birds Movie 2 and It’s My Life.

Kapil Sharma married Ginni Chatrath in 2018. The couple has two children, a daughter and a son namely Anarya Sharma and Trishaan Sharma. Kapil Sharma is currently on a break from TV as he is spending time with his family.

India To Get Completely Vaccinated By End 2021: Centre To Supreme...