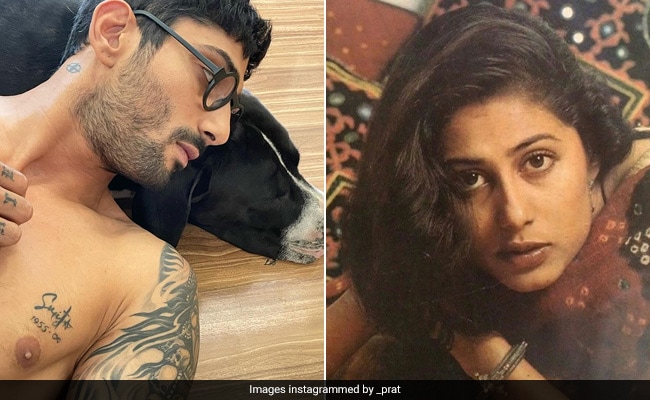 Prateik Babbar has been trending on social media since Wednesday morning, courtesy his latest tattoo. Prateik, who is the son of actor-politician Raj Babbar and late actress Smita Patil, got his mother’s named inked on his chest, or in his words – “on (his) heart.” The actor posted a photo of himself showing us his new tattoo that read, “Smita 1955 – (infinity symbol).” In the caption of his post, Prateik Babbar wrote: “Inked my mother’s name on my heart… smita #4ever, 1955 – (infinity symbol).” Prateik’s cousin and actor Arya Babbar and his friends from Bollywood reacted to his post with read heart icons.

Smita Patil was known for her contribution to the parallel cinema moment in the Eighties. She was born on October 17, 1955. She married Raj Babbar and died a few weeks after she gave birth to Prateik. She was just 31. After her death in 1986, Raj Babbar returned to live with his first wife Nadira Zaheer, with whom he has two children – Juhi and Arya.

Talking about his new tattoo, Prateik Babbar says it is “inked exactly where she’s (Smita Patil) supposed to be, on my heart.” He told the Times Of India: “I always wanted my mother’s name tattooed. I have been indecisive about it for years. The moment finally felt right. She’s inked exactly where she’s supposed to be, on my heart. 1955 signifies the year she was born and now with me till infinity.”

Prateik had earlier got his wife Sanya Sagar‘s name tattooed on the same place he got his mother’s name inked now. See these pictures featuring his old tattoo:

Prateik Babbar has starred in films like Jaane Tu… Ya Jaane Na, Ekk Deewana Tha, Dhobi Ghaat, Aarakshan, Baaghi 2, Mulk, Chhichhore, Darbar and Mumbai Saga. He will next be seen in Brahmastra and Bachchan Pandey.