Taiwan has only received about 700,000 vaccine doses to date, all from AstraZeneca Plc, which are rapidly running out. It has millions more on order, including from Moderna Inc. 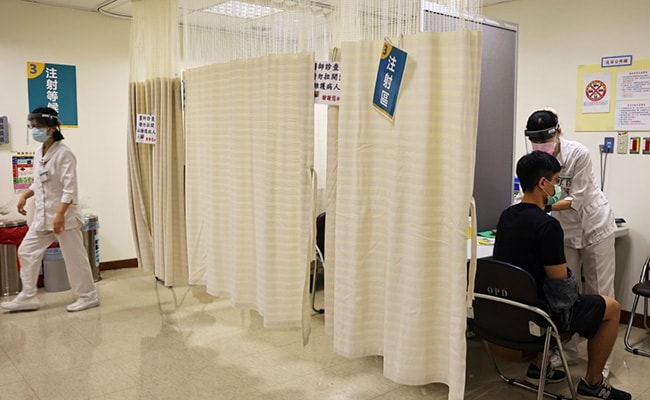 A vaccination session for health workers amid a Covid surge, in New Taipei City, Taiwan. (FILE)

A surge in domestic COVID-19 cases in Taiwan after months of relative safety is intensifying pressure on the government to accept vaccines from China, as the island has vaccinated just 1 per cent of the population with no immediate sign of new shots arriving.

The Chinese-claimed island and Beijing have repeatedly sparred over the pandemic since it began.

Taipei accuses Beijing of spreading fake news and preventing its full participation at the World Health Organization, while Beijing says Taipei is playing political games with its people’s lives by refusing Chinese vaccines.

Taiwan has only received about 700,000 vaccine doses to date, all from AstraZeneca Plc, which are rapidly running out. It has millions more on order, including from Moderna Inc.

Over the weekend, Hung Hsiu-chu, a former head of Taiwan’s main opposition party, the Kuomintang (KMT), said the government should allow in Chinese vaccines as soon as possible, saying that they are internationally accepted and that Taiwan cannot wait.

“At this moment, lives are at stake, and we respectfully tell the Tsai government: the real enemy is the virus, not the mainland,” she said, referring to President Tsai Ing-wen.

The KMT, always wary of being painted as pro-China, has not explicitly backed or rejected the idea, but has called on the ruling Democratic Progressive Party (DPP) not to tar as Communist Party sympathisers those who are trying to obtain more vaccines.

Pressure is growing from industry too to address the issue, especially after China’s Shanghai Fosun Pharmaceutical Group Co Ltd said on Saturday it was willing to provide Taiwan with BioNTech SE COVID-19 vaccines.

A source familiar with the situation said major Apple Inc supplier Foxconn was exploring directly approaching Fosun for the shots to vaccinate its employees and their families, though the company had not formally started discussions with the Chinese firm or Taiwan’s Central Epidemic Command Centre.

Fosun has 10 million shots that are expiring in August and is anxious to offload them, the source added. Fosun did not respond to requests for comment.

“If we can do what we can to prevent the epidemic in Taiwan, then our company is willing to assist,” it added.

Health Minister Chen Shih-chung said on Sunday that if companies wanted to buy vaccines they had to talk to his ministry.

Chen has said that China has not provided enough evidence that its vaccines are safe, and that most Taiwanese would not want to take them anyway. Chen has also said the law prohibiting the imports of any Chinese vaccine would need to be revised.

Beijing has called on Taiwan to cast aside political prejudices.

“Most Taiwanese compatriots are eagerly anticipating the use of mainland vaccines,” China’s Taiwan Affairs Office said in a statement to Reuters, without offering evidence. “The pressing task is to remove artificial political obstacles on the island.”

Taiwan’s government has kept vaccine purchase details under close wraps, but has promised more are on the way.

Chen met virtually with his U.S. counterpart, Xavier Becerra, last week and discussed vaccines, but no announcements of any U.S. help have come yet, even after President Joe Biden said the country would release stocks to other parts of the world.

However, two sources familiar with the matter told Reuters that the United States was trying to help speed up deliveries of the vaccines Taiwan has already ordered.