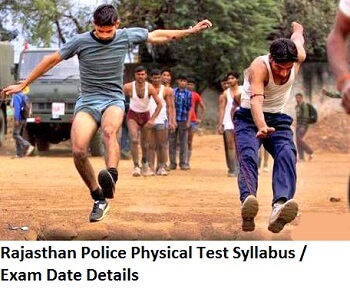 The name of the post for which this test is being conducted is mainly of the constable in various Police Stations across the state of Rajasthan. The Total number of vacant posts for which this Rajasthan Police Constable Physical Test will be conducted are 5390. The 5390 posts include the posts of General Constable, Constable Driver, and Constable Operator as well. The information has been provided through an official notification that was issued recently by the Recruitment Cell of Rajasthan Police. Before we give you more information about this test, you must know a little bit about the job that a constable is meant to do in the Police Station. The Complete Rajasthan Police Physical Details have been given in the end of this article.

As stated above, the total number of vacancies for which this Rajasthan Police Constable recruitment is being conducted are 5390 in number. The applications for this recruitment has already been received and a lot of eligible candidates have applied for the exam. The exam will be conducted now and the candidates who will score above the cut off marks in that computed based exam will be eligible to appear in the physical test that will be conducted after it.

The Physical Test will be conducted in two segments:

The Maximum Marks that any applicant can score in this exam are 100. Out of these 100 marks, the Written Examination for Rajasthan Police Constable Recruitment is worth 75 marks and the Physical Efficiency Test (PET) is worth 10 marks for the post of Constable Driver and 10 marks for all other posts. The Driver Post also consists of a separate skill test that is meant for 15 marks in this Recruitment. For posts other than Driver, the remaining 10 marks are given based on the earlier special qualifications and achievements of the applicant like  NCC, Homeguard, ITI & Computer Knowledge.

What does a Police Constable do?

The Police Constable is basically a person who is responsible for enforcing the law in the area that has been allotted to him. In most of the countries, the job of the constable is also known as the Law Enforcement Officer. In India, Constable is the lowest rank in the police department and any candidate applying to become a police constable needs to appear in any written exam and after that he also needs to clear the physical test which will be conducted now. But the best part about this is that the applicant of this test doesn’t need to have any special knowledge about the law in order to enforce it.

The Post of Constable in India is followed by the post of Head Constable which is a post to which only the best constables get promoted to. If you want to recognize a police constable, then that can be done by looking at the shoulder of his Uniform. If there is no badge on the shoulder strap of any person working in the Police Department of any state in India, then he is a constable. The Head Constable has one strip on the shoulder and a chevron. Although the insignia in various different states can vary a little bit, but it is almost the same.

The main job of a Police Constable is basically to follow the orders of the Police Officers to which they have been allotted. It is their duty to enforce the law in the state and the area that is assigned to them, but they have no right to take a decision by their own without taking permission for the Station House Officer of the Police Station in which they work.