The breakdowns amid the worst recorded heat wave in Pacific Northwest history are the latest sign that unprecedented challenges loom this summer. 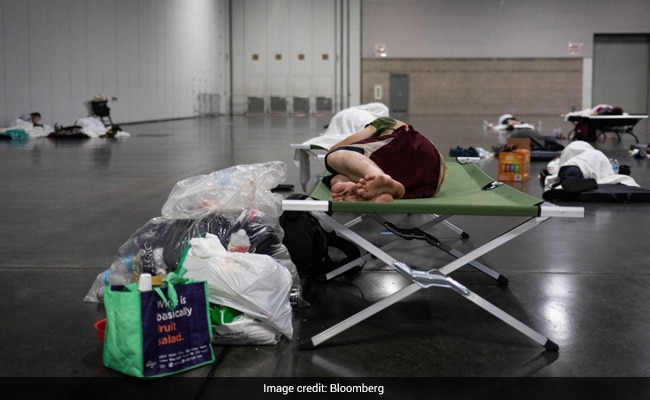 Heat, drought have authorities on edge as they try to keep power on avoid heat-related deaths in US

The breakdowns amid the worst recorded heat wave in Pacific Northwest history are the latest sign that unprecedented challenges loom this summer. Heat, drought and wildfires tied to climate change have authorities on edge as they try to keep the power on and avoid more heat-related deaths that claim about 650 U.S. lives annually. President Joe Biden will meet governors of Western states Wednesday to discuss how to address wildfire threats.

We have another pavement buckle, this one on northbound I-5 at NE 195th St. The two center lanes are blocked. The HOV lane is open to ALL traffic in this area. pic.twitter.com/fk2Vk7VBjh

In Portland, the mercury hit 116 degrees Fahrenheit (47 Celsius) Monday, a third-straight record, while Seattle notched another all-time high at 108, the National Weather Service said. Lytton, British Columbia reached 118, a new record for Canada just one day after shattering a prior high since 1937.

“I have never seen anything like this in my 40 years of forecasting,” said Paul Walker, a meteorologist with AccuWeather Inc. in State College, Pennsylvania.

Meanwhile, the Northeast also is kicking off a heat wave from Pennsylvania to Maine that could push New York into the upper 90s, the National Weather Service said. Humidity will make it feel even hotter this week, driving energy demand across the region that relies on air conditioners to beat summer heat.

Boston tied a daily record of 97 Monday, the 10th time this year the city topped 90, while Newark tied a record at 99. The East Coast heat wave however will be different from the Northwest’s because it will reverse in coming days, with rain and a high of just 77 forecast for New York Friday.

“It is hot all over, which is putting a demand on already tight resources,” said Scott Miller, executive director of the Western Power Trading Forum. “There is limited transmission to move generation around. Folks weren’t used to having such high temperatures in the Pacific Northwest.”

A Heat Advisory is in effect for much of the region. High temps climb into the 90s for many, but will feel closer to 100 with the humidity.

Heat is one of the leading weather-related killers. Stay safe!

Here’s what it will feel like later today: pic.twitter.com/gqMLNZ4Lmo

The rising heat sent natural gas futures toward the longest winning streak in almost three years and raised power prices, even triggering rare power grid warnings for Eastern states. Operators of the largest U.S. grid, stretching from Washington to Chicago, and another in the Midwest have asked transmission and generation owners to suspend some maintenance.

Other utilities beyond Avista may be forced perform rolling outages as the heat persists through the week, and demand is likely also elevated by the easing of pandemic restrictions and the re-opening of the economy, Miller said.

The average price for day-ahead power in New England rose Tuesday to the highest for this time of the year since 2008, while New York City’s were the most for late June since 2012, grid data from Wood Mackenzie show.

In agricultural markets, futures for canola, used for cooking oil and making biofuels, surged Tuesday to highest since at least 1982. Contracts for spring wheat touched a near four-year high as parched U.S. and Canadian crops dim the outlook for robust supplies.

Seattle’s high temperatures also caused some outages in underground power infrastructure, which is harder to fix because of excessive heat in equipment vaults, a representative for the municipal utility said late Monday. About 5,000 customers had no power early Tuesday.

In California, where grid operators may request conservation to avoid outages, dry vegetation helped the Lava Fire near Mount Shasta explode in size overnight. Authorities ordered evacuations and closed roads, a sign of a hard summer to come after a dry winter.

For the Northwest, some cooling in Seattle and Portland is in store as winds from the Pacific Ocean push the heat east over the Cascade Range, though many places in the region will still be in the 90s. That’s rare this time of year in Seattle, which doesn’t usually get hot until later in summer and June is often temperate, even gloomy.

This is the earliest that Portland has had a stretch of 100-degree days, according to the weather service. The city was hotter Monday than ever before in Dallas-Fort Worth, Oklahoma City, or Austin, Texas, meteorologist Bob Henson, author of “The Thinking Person’s Guide to Climate Change,” tweeted.