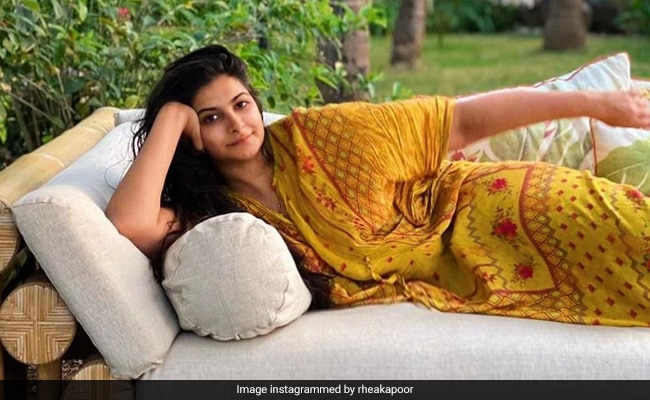 Rhea Kapoor has checked into a life of chill in Alibaug, away from the hustle and bustle of Maximum City. She has been sharing glimpses of her days in Alibaug on Instagram, and oh boy, do they look fabulous. For living the Alibaug life, the 34-year-old filmmaker has picked one genre of outfit as her favourite – she is loving the kaftan feel and there’s proof of that on her Instagram. In a new post, Rhea shared photos of herself lazing around in a yellow kaftan – she shared glimpses of her posing on a couch, enjoying a gorgeous sunset and basking in the sun – captioning them as: “Kaftan life from day to night.”

Here’s how Rhea Kapoor is living the kaftan life in Alibaug:

Rhea Kapoor is a woman of many talents, one of which is cooking up a storm in the kitchen. And when in Alibaug, here’s how her meals look like: “Rhea’s signature spicy lobster garlic noodles.”

Meanwhile, looks like Alibaug has inspired Rhea Kapoor to get back into filmmaking. Sharing a sunset mood, here’s what she wrote on her Instagram: “I can’t wait to make movies again. Reset.”

Professionally, Rhea Kapoor is the stylist behind her sister Sonam Kapoor’s stunning looks. She has co-produced films such as Aisha, Khoobsurat and Veere Di Wedding, all three starring Sonam Kapoor. Aisha was Rhea Kapoor’s first film as a producer while Karan Boolani worked as an assistant director for the movie.