Vladimir Putin used the country’s main economic forum in the second city of Saint Petersburg to issue a new plea for Russians to get immunised, as authorities struggle to ramp up vaccination efforts. 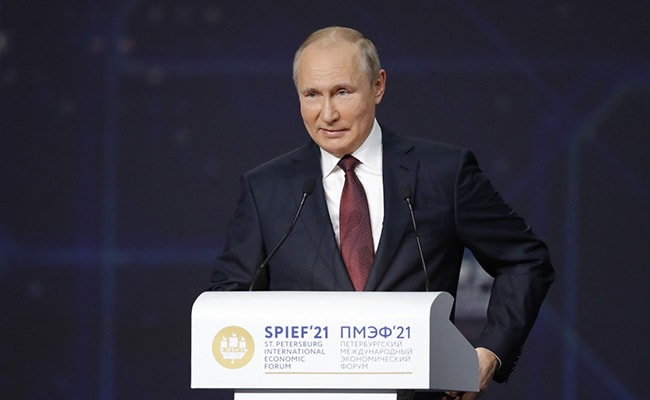 President Vladimir Putin called on Russians Friday to get vaccinated against the coronavirus and said Moscow was prepared to allow foreigners to enter the country to get the jab.

The Kremlin chief used the country’s main economic forum in the second city of Saint Petersburg to issue a new plea for Russians to get immunised, as authorities struggle to ramp up vaccination efforts.

“Every adult citizen of Russia has the opportunity to get vaccinated completely free of charge,” Putin told the Saint Petersburg International Economic Forum, which is often called the Russian Davos.

“I’d like to ask our citizens to use this opportunity to protect themselves and their loved ones.”

The 68-year-old leader said that Russian authorities had not registered a single fatality linked to the coronavirus vaccine.

He reiterated that he himself had been vaccinated and that the jabs have few side effects.

“I have first-hand knowledge of that,” Putin said.

Putin said that Russia’s main vaccine, Sputnik V, had already been registered in 66 countries with a combined population of more than three billion people.

He said Russia was ready to start vaccinating foreigners and tasked the government with organising access to paid vaccination programmes for them.

“Taking into account the efficiency of our vaccines, I know that such demand is pretty high,” Putin said.

“The domestic pharmaceutical industry is ready to further ramp up vaccine production,” he added.

Kirill Dmitriyev, the head of the Russian Direct Investment Fund (RDIF) which finances the vaccine, said at the forum that Russia could become open for “vaccine tourism” from July.

The Kremlin said that Putin had been vaccinated in private but it is not known which of Russia’s three main jabs he had used.

Named after the world’s first satellite launched by the USSR in 1957, Sputnik has been touted by Putin as “the world’s best” jab, while leading independent medical journal, The Lancet, deemed it effective in a study published in February.