Fiame Naomi Mata’afa revealed on Tuesday she was facing a private prosecution over the makeshift ceremony. 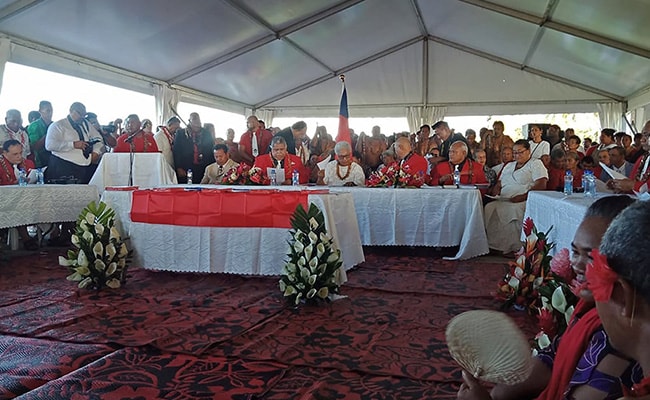 A constitutional crisis in the Pacific nation of Samoa headed back to the courts on Tuesday as Prime Minister-elect Fiame Naomi Mata’afa dismissed the “electoral games” of her predecessor, who has refused to relinquish power.

Mata’afa was sworn in as the country’s first female prime minister at an extraordinary ceremony in a tent outside parliament on Monday after the island nation’s long-serving ruler refused to cede power and ordered the doors of the building to be locked.

Mata’afa revealed Tuesday she was facing a private prosecution over the makeshift ceremony.

“It’s all part of the electoral game I suppose… I don’t think we were terribly surprised,” Mata’afa told New Zealand broadcaster TVNZ of the latest legal manoeuvres.

She said the legitimacy of the ceremony was always likely to be challenged as incumbent prime minister Tuilaepa Sailele Malielegaoi continues to dispute the results of the election on April 9.

Malielegaoi led the South Pacific nation for 22 years but has lost a string of court challenges seeking to overturn the vote and call a new election.

He has labelled the swearing-in ceremony “treason” and insists he is still prime minister.

While the judiciary has so far sided with Mata’afa, the international community continues to hedge its bets on who will win the political power struggle under way in the nation of 220,000.

Influential players in the region’s politics, including Australia, New Zealand and the United Kingdom, have restricted themselves to calls for dialogue and respect for the democratic process.

China has not made its position known, although it enjoyed a close relationship with Malielegaoi’s government and Mata’afa has said she will scrap a major Beijing-backed port project in the island nation.

The United Nations said Secretary General Antonio Guterres had been following developments and the world body “stands ready to provide support to Samoa if requested by the parties”.

The only country to offer Mata’afa formal recognition is the tiny Federated States of Micronesia in the northern Pacific.

“(FSM) both upholds and promotes democratic values — it is imperative that we show our friends, especially during their darkest hours, that we stand with them,” President David W. Panuelo said in a statement.

“Samoa is a cherished friend and Pacific neighbour; recent weeks have been very troubling for the Samoan people… they must know that they are not facing these challenges alone.”

Samoa gained independence in 1962 after nearly 50 years as a New Zealand protectorate and the incumbent Human Rights Protection Party has been in power since 1982, apart from a brief coalition period in 1986-87.

It has always enjoyed huge parliamentary majorities but Mata’afa’s FAST Party came from nowhere after its formation in mid-2020 to claim 26 of the legislature’s 51 seats in last month’s vote.

US Urges Russia To “Immediately” Allow Doctors For Kremlin Critic

Nothing “Conclusive” On India-Dominant Variant To Delay Reopening: UK PM