The stars on Lt Nitika Kaul’s shoulders were pipped by the chief of Indian Army’s Northern Command, over two years after she lost her officer husband. 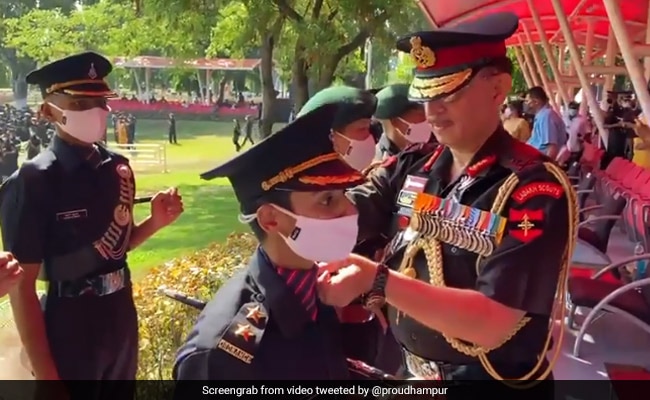 A little over two years ago, Nitika Kaul blew a painful farewell kiss at her ‘simple and sweet’ love story. Standing besides a Tricolour-covered coffin in Dehradun one February day in 2019, she kept asking mourners to stay strong rather. Inside it lay her husband Major Vibhuti Shankar Dhoundiyal. Today, over 25 months later, Lt Gen Y K Joshi, chief of the Indian Army’s Northern Command, pipped the stars on Lieutenant Nitika Kaul’s uniform as she passed out of the Officer’s Training Academy, Chennai.

Lt Kaul was among the 31 Short Service Commission woman cadets who got passed out today from the institution.

The brass band played Cliff Richards’s Congratulations and Celebrations at haloed Parmeshwaran Drill Square as she stood rock like, answering some queries from Lt Gen Joshi and receiving his heartfelt compliment: “…I’m really proud of you.”

#MajVibhutiShankarDhoundiyal, made the Supreme Sacrifice at #Pulwama in 2019, was awarded SC (P). Today his wife @Nitikakaul dons #IndianArmy uniform; paying him a befitting tribute. A proud moment for her as Lt Gen Y K Joshi, #ArmyCdrNC himself pips the Stars on her shoulders! pic.twitter.com/ovoRDyybTs

His words echoed her own from two years ago when she told her dead husband, “I am really proud. We all love you. The way you love everyone is entirely different because you sacrificed your life for the people who you may have never met, but still you decided to give your life for them. You are such a brave man. I am very honoured to have you as my husband. I’ll love you till my last breath. I owe my life to you.” 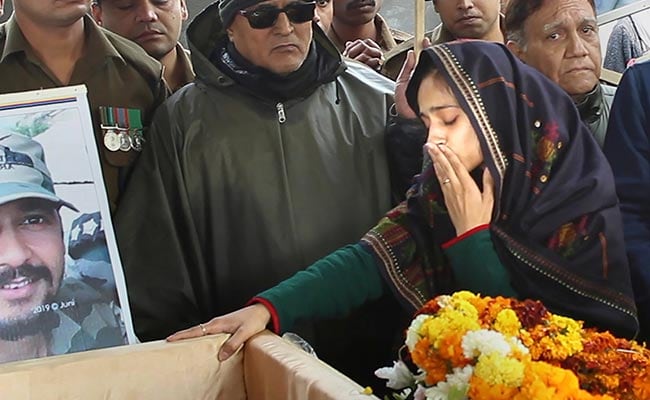 Major Dhoundiyal was one among the four soldiers – Sepoy Hari Singh, 27, Havaldar Sheo Ram, 37, and Sepoy Ajay Kumar, 27, who died in an 18-hour gunbattle in Pulwama, Kashmir on February 20, 2019. That operation had led to the elimination of, among others, a Jaish-e-Mohammad terrorist, the suspected key conspirator in the terror attack in the same district a week earlier that led to the killing of around 40 CRPF personnel.

The Major was supposed to visit home in April that year for the couple’s first wedding anniversary.

Following his death, Ms Kaul, then an employee with a private firm, swore to follow her husband’s path and joined OTA, Chennai. Eleven months of training later, she is now commissioned into the Ordnance Corp of the Indian Army, posted under the Southwestern Command.

“My journey has just started…I’d like to thank everyone who kept faith in me. My mother-in-law, my mother, and others who have been part of this journey,” Lt Kaul said.

Remembering her husband, she said, “It’s like a parallel world. The day I stepped in, I felt that I am taking the same journey that he took. He is somewhere around here. Looking at me, holding me and saying, ‘you just did it’. I just love you Vibhu, I’ll always love you.”

OnePlus Watch Cyberpunk 2077 Limited Edition to Launch in China on...