“I’m having Covid pneumonia which is progressive,” said Dr KK Aggarwal in the video. 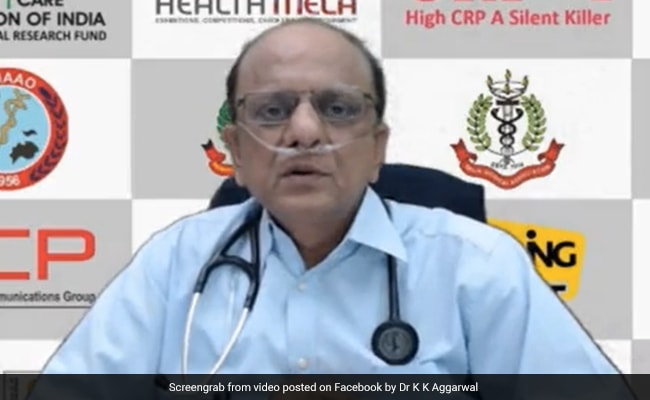 
Dr KK Aggarwal, a former president of the Indian Medical Association and a Padma Shri recipient, died last night of Covid. Around two weeks ago, Dr Aggarwal had shared a Facebook video declaring that he represented the collective consciousness of the medical profession when he appeared on camera even while battling Covid and pneumonia. “The show must go on,” he said in the clip which is now going viral on social media. It was one of the hundreds of videos that the cardiologist had created in an effort to educate the public on Covid care.

Dr Aggarwal, 62, died at 11.30 pm on Monday “after a lengthy battle with Covid”, announced an official statement on his Twitter account.

“Ever since he became a doctor, Padma Shri Dr KK Aggarwal has dedicated his life to the welfare of the public and raising health awareness. Even during the pandemic, he made constant efforts to educate the masses and was able to reach out to over 100 million people through numerous videos and educational programs and saved countless lives,” said the statement.

News of his death prompted a flood of condolence messages from social media users, and one of his last videos resurfaced on the microblogging platform Twitter. Dr Aggarwal had shared the video on Facebook on April 30.

“I’m having Covid pneumonia which is progressive,” he said in the video. “But even then remember Raj Kapoor’s words – ‘picture abhi baaki hai… the show must go on.'”

Dr KK Agrawal In His last video : ‘Show must go on’ pic.twitter.com/WKgUqr4udI

“Your service to the nation will be remembered,” wrote one Twitter user in the comments section.

Salute to you sir, your service to the nation will be remembered at this our of crisis India & world are facing.

Another said that he learned much about Covid from Dr KK Aggarwal’s videos.

My complete learning abt Covid started by watching @DrKKAggarwal Ji’s free awareness sessions.He was the only one who motivated everyone by saying”Darna Nahi Hai N D one who confidently said”Focus on high risk person”in your family n giv symptomatic treatment to kids@bejonmisrahttps://t.co/Pb27N8ufKX

Several viewers also thanked the doctor for his efforts to raise public awareness.

The video was part of a string of videos that Dr Aggarwal had shared on Facebook before the account started airing “repeat telecasts” with a statement saying that the cardiologist would be back soon.

The last few videos on his Twitter account were also posted with a disclaimer – “Dr KK is recovering from COVID-19, meanwhile this account is being managed by HCFI & Medtalks.”

Dr Aggarwal had been on ventilator support at Delhi’s AIIMS hospital for the past few days, according to his family.