“When they separated, I was very young, and it was very simple, they were happier apart than they were together,” said Shruti Haasan 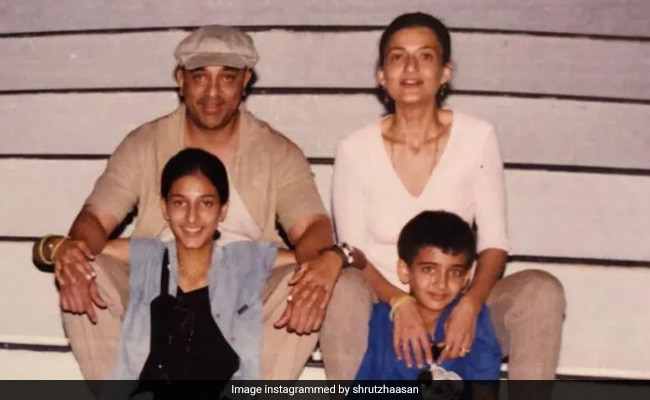 A file photo of Shruti Haasan with her parents. (courtesy shrutzhaasan )

Shruti Haasan, daughter of veteran actors Kamal Haasan and Sarika, in a recent interview with Zoom Digital, talked about her parents’ separation and the impact that it had on her. “I was glad they separated as I do not think two people who are not getting along, should be forced to get along for some reason,” Shruti told Zoom Digital and added that they “continue to be wonderful parents.” During the interview, the actress confessed that she is “particularly close” to her dad. She added, “My mum is doing well and is a part of our lives as well. They are both uniquely wonderful and beautiful people.” Emphasising the importance of individuality, the actress said, “They were not that beautiful together anymore. That does not take away their individual beauty as human beings. When they separated, I was very young, and it was very simple, they were happier apart than they were together.”

Superstar Kamal Haasan married actress Sarika sometime in the 1980s after dating for several years. Kamal Haasan was earlier married to dancer Vani Ganapathy for about ten years. They got divorced in 1988. Kamal Haasan and Sarika welcomed their first child Shruti Haasan in 1986. Their second child, Akshara was born to the couple in 1991. Sarika and Kamal Haasan got divorced in 2004. Akshara made her film debut in 2015 with the comedy drama Shamitabh, co-starring Amitabh Bachchan and Dhanush.

Shruti Haasan has starred in several Tamil as well as Bollywood films. She stepped into Bollywood with the 2009 film Luck, co-starring Imran Khan. The actress has also been a part of films such as Welcome Back, Ramaiya Vastavaiya, Dil Toh Bachcha Hai Ji and D-Day among others. She will be seen sharing screen space with Baahubali star Prabhas in a film titled Salaar.