Raveena Tandon shared that the Rishi Kapoor wanted to use this picture in his autobiography, Khullam Khulla: Rishi Kapoor Uncensored 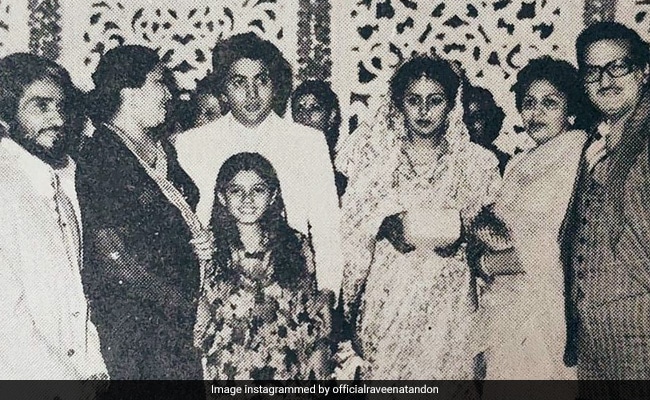 Raveena Tandon has finally found a priceless picture from Rishi Kapoor and Neetu Kapoor‘s wedding that she had been looking for since many years. And it is a “treasure” for her, she says. On Tuesday night, Raveena took us back to Rishi and Neetu’s wedding in the 80s by sharing the same picture on her Instagram handle. In the picture, the newlyweds’ Rishi and Neetu are posing together with their colleagues from the Hindi film industry. Raveena as a little girl is standing with Rishi as she is flashing her cute smile. Raveena’s father and filmmaker Ravi Tandon and actor Mac Mohan are also featured in the frame.

Raveena also shared an interesting anecdote in her caption. The Mohra actress referred to Rishi Kapoor as “Chintu uncle” and recalled that he wanted to use this picture in his autobiography Khullam Khulla: Rishi Kapoor Uncensored. However, she had lost the original picture. Raveena wished she could show this picture to Rishi Kapoor when he was alive. The Dilwale actress revealed that actress Juhi Babbar had initially found this “gem” and thanked her in her note.

She tagged Neetu Kapoor in her caption and wrote, “Found a gem . A tad too late though. Thank you Juhi Babbar for finding this pic. Chintu uncle kept asking me for this pic to put in his autobiography. And some how I had lost the original. Found it .so that’s me standing with Chintu uncle, at his wedding…Wish I’d gotten it a bit earlier . Nonetheless it is treasure for me #treasuredmemories…”

Rishi Kapoor married Neetu Singh in 1980. They dated each other for quite some time. Rishi worked with Neetu in films such as Khel Khel Mein, Kabhi Kabhie, Rafoo Chakkar and Amar Akbar Anthony to name a few. Rishi and Neetu have two children, Ranbir Kapoor and Riddhima Sahni. Rishi Kapoor was battling leukemia and died in April 2020.

Rishi Kapoor worked with Raveena’s father Ravi Tandon in his several directorial ventures such as Rahi Badal Gaye and Aan Aur Shaan. Rishi also worked with Ravi in films like Jhoota Kahin Ka and Khel Khel Mein in which he was paired opposite Neetu. On the other hand, Neetu also collaborated with Ravi in Waqt Ki Deewar among many others.

Coming back to Raveena, years later, the actress shared screen space with Rishi Kapoor in Saajan Ki Baahon Mein and Jai Hind in the 90s.