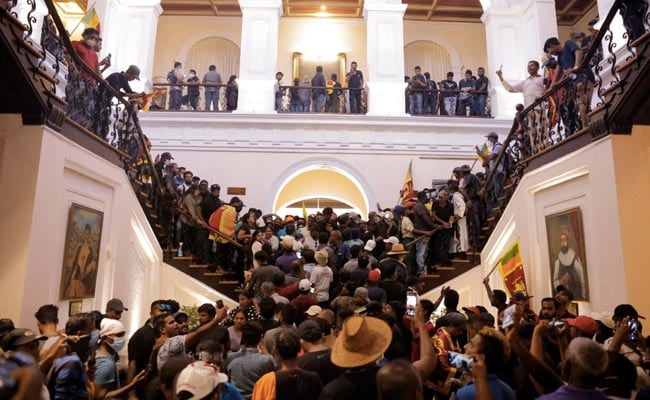 Three people have been arrested by the Sri Lankan police as they were trying to sell 40 gold-plated brass sockets stolen from the President’s House in Colombo after angry demonstrators entered the iconic building during an unprecedented anti-government protest over the severe economic crisis in the country.

Three persons who entered the President’s House at Fort on July 9 during protest have been arrested with 40 gold-plated brass sockets that were fixed on the walls to hang window curtains, the online newspaper Daily Mirror reported.

The Welikada police arrested the suspects while attempting to sell the stolen items on Sunday, it said.

The arrested suspects, aged 28, 34 and 37, are residents of Obeysekarapura in Rajagiriya. Police said the three were also suspected drug addicts.

They will be handed over to the Colombo (North) Criminal Investigation Division, which is handling the investigations of the incidents, the report said.

Based on initial investigations at least 1,000 items of value, including rare artefacts have gone missing from the Presidential Palace as well as the Prime Minister’s official residence.

Special investigation teams have been formed to begin a probe, it said, web portal Colombo Page quoted police sources as saying on Saturday.

What is compounding the agony for the investigative officers is that the Sri Lankan Department of Archaeology does not have a detailed record of the antiques and different artefacts at the Presidential Palace, even though it has been gazetted as a place of archaeological importance, the report said.

Newly-elected President Wickremesinghe has said he respects the rights of the protesters to peacefully undertake their demonstrations, but has asserted that he will not allow another government building to be occupied.

Wickremesinghe said he has authorised Sri Lanka’s armed forces and the police to take whatever action is necessary to stop people from storming public facilities and obstructing Parliament.

He has said the occupation of government buildings is illegal, warning that legal action would be taken against their occupiers. Protesters set Wickremesinghe’s personal residence on fire and occupied his office during the protests.

Sri Lanka has seen months of mass unrest over an economic crisis and many blame the former government led by ousted president Gotabaya Rajapaksa and his family for mishandling the island nation’s economy.

Sri Lanka, a country of 22 million people, is under the grip of an unprecedented economic turmoil, the worst in seven decades, leaving millions struggling to buy food, medicine, fuel and other essentials. Sri Lanka’s total foreign debt stands at USD 51 billion.