Amitabh Bachchan’s granddaughter Navya Naveli Nanda was the first one to drop a comment. “Ooooooo,” she had written 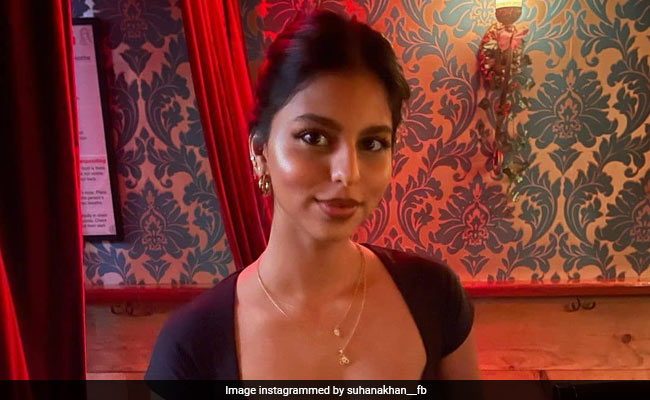 Suhana shared and then deleted this photo (courtesy suhanakhan )

Shah Rukh Khan’s daughter Suhana Khan, who is pursuing higher studies in New York, often trends for glimpses of her stunning looks. On Monday evening, she shared a bunch of photos from what appears to be a night out in New York, and the morning after, Instagram found them deleted. As soon as Suhana Khan had posted the photos, one of her childhood friends – Amitabh Bachchan’s granddaughter Navya Naveli Nanda – was the first one to drop a comment. “Ooooooo,” she had written cheering for Suhana’s gorgeous OOTN. The now deleted photos have been curated by fan-clubs dedicated to Suhana Khan and made to go viral. In the photos, Suhana can be seen posing for the camera at what appears to be a New York eatery. Dressed in black, Suhana accessorised with statement jewellery in gold.

For now, the last post on Suhana Khan’s Instagram is from a week ago – a photo of her walking hand-in-hand with a friend. Suhana Khan has also restricted comments on the post, just like for most of her other entries.

In September last year, Suhana Khan opened about being trolled for her skin colour and being at the receiving end of distasteful comments on Instagram. Sharing screenshots of the comments on her skin tone, Suhana pointed out that the comments are from “full grown men and women” – all of them Indian, which means they share the same skin tone.

Meanwhile, Suhana Khan is always positively hyped up her besties – Shanaya Kapoor, Ananya Panday and Navya Naveli – for the photos she shares on Instagram:

Suhana Khan is Shah Rukh Khan and Gauri Khan’s middle child. She goes to New York’s Columbia University, aspires to be an actress.

“Like We Did Last Year, We Will Fight Covid With Greater...

Delhi’s Batra Hospital Says Doctor Among Those Dead After It Ran...