West Bengal, which is in the midst of an eight-phased assembly election, has seen a sudden spike the COVID-19 cases. 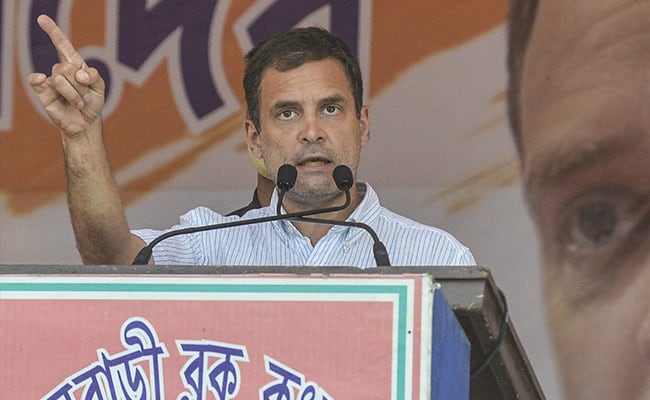 Rahul Gandhi said he was suspending all his public rallies in West Bengal. (File photo)

Senior Congress leader Rahul Gandhi today tweeted to say that he is suspending all his public rallies in West Bengal in view of view of the Covid situation in the state. In a brief post, Mr Gandhi also advised political leaders against holding large public rallies.

“I would advise all political leaders to think deeply about the consequences of holding large public rallies under the current circumstances,” Mr Gandhi tweeted.

West Bengal, which is in the midst of an eight-phased assembly election, has seen a sudden spike the COVID-19 cases.

In view of the Covid situation, I am suspending all my public rallies in West Bengal.

I would advise all political leaders to think deeply about the consequences of holding large public rallies under the current circumstances.

The political leaders of all political parties including the Bharatiya Janata Party, TMC have openly flouted all COVID-19 norms put in place by the Health Ministry while campaigning for the first five phases of the elections. The norms of social distancing were tossed during the massive rallies and roadshows held by the political parties.

However, with the surge in COVID-19 cases in the country, the Election Commission (EC) has decided to curtail the timing of the campaign for the remaining phases of the election and extended the silence period to 72 hours for each of the phases.

In its order, the EC said that no rallies, public meetings, street plays, nukkad sabhas, shall be allowed on any day during the days of the campaign between 7 pm and 10 am.

The order has come into effect from 7 pm on Friday.

“Silence period for rallies, public meetings, street plays, nukkad sabha, bike rallies or any gathering for campaigning purposes shall be extended to 72 hours before the end of the poll for Phase 6, Phase 7 and Phase 8 in the State of West Bengal,” it said.

The Commission also took a serious view against repeated violations by star campaigners/political leaders/candidates who are supposed to be torch bearers for the campaign against COVID-19, grossly violating COVID-19 protocols, thereby exposing themselves as well as the public to the danger of infection.

West Bengal reported 6,910 new infections and 26 deaths just ahead of the polling in the fifth phase. According to the state health bulletin, the total count of cases has reached 6,43,795. The number of active cases in the state stands at 41,047.

This morning, India saw the deadliest day of the pandemic as 1,501 deaths were recorded. The country also recorded the biggest daily surge in cases with 2,61,500 infections, taking the caseload to 1.47 crore total cases.

Prepare For Covid Lockdown, Rules Not Being Followed: Uddhav Thackeray

Mehul Choksi Captured In Dominica While Trying To Flee To Cuba:...