In the video of the event, the couple and the wedding guests were seen without face masks and not observing Covid-19 protocols. 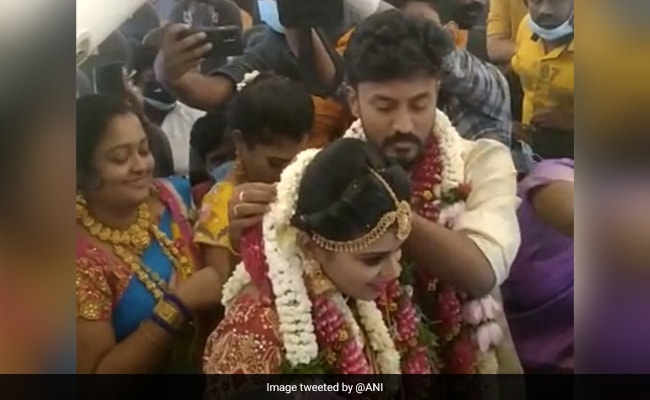 The groom was photographed tying mangalsutra to the bride.

A Madurai couple decided to seal their special bond of love by getting married in the sky! The couple booked an entire chartered flight and flew from Madurai to Bengaluru while the wedding ceremony was held mid-air. Relatives and guests were the other passengers on the flight.

In a video of the event that has gone viral on the internet, the groom is seen tying the mangalsutra, and getting photographed with his new bride. The photographer in one shot encourages them to smile for the camera.

A couple tied the knot on-board a chartered flight from Madurai, Tamil Nadu. Their relatives & guests were on the same flight.

Others are also seen standing behind the couple and there are also visuals of the inside of the aircraft with people sitting and enjoying the function. Most of them were seen without face masks and not observing Covid-19 protocols.

The aviation regulator DGCA has now initiated investigation into the mid-air wedding ceremony.

DGCA has initiated investigations on mid-air marriage. It has sought a full report from the airline & Airport Authority. SpiceJet crew is off rostered. Airline directed to lodge complaint against those not following COVID appropriate behavior with relevant authorities: DGCA pic.twitter.com/aTNyjIKOFO

As per the visuals, the flight seemed to be full capacity.

In social media videos the bride, wearing a saree, was seen bedecked with flowers and jewellery and the groom was seen dressed in traditional south Indian attire.

Tamil Nadu is currently under lockdown till May 31 due to prevailing Covid-19 restrictions.