Monday, October 18, 2021
Rajpostexam.com Single Spot For Worldwide Information And News
Home Trending News Telangana Minister Gets Complaint About Biryani. Then A Dig From An MP
FacebookTwitter

The man later deleted his tweet but not before Telangana minister KR Rama Rao came up with a hilarious response. 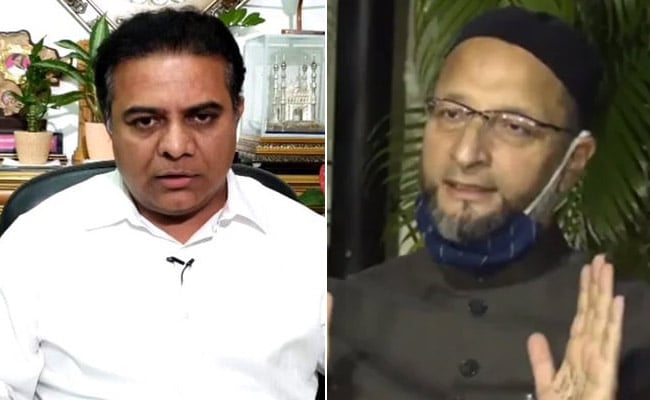 The people of Telangana and Hyderabad, in particular, are exceptionally passionate about their biryani. But how far would you take your love for the mouth-watering dish? It looks like true fans of biryani would not hesitate to even reach out to ministers of the government if they feel that they have been wronged as a customer and lover of the dish. Don’t believe us? Then head to the Twitter handle of Minister of Municipal Administration and Urban Development of Telangana, KT Rama Rao, who recently received the most Hyderabadi complaint that one could ever come up with.

It all started when a Twitter user, who goes by the name Thotakuri Raghupathi, felt dissatisfied with the biryani he had ordered via a food delivery app. Losing no time, the customer expressed his grievance on the micro-blogging site. He made sure to share a picture of the dish that was missing the “extra masala and (chicken) leg piece” that he had ordered and tagged the food delivery aggregator too.

Things took a hilarious turn when he also tagged Mr Rao’s official handle. The minister, who is popularly known as KTR, has been actively relaying COVID-19 related requests and arranging resources for those in need. 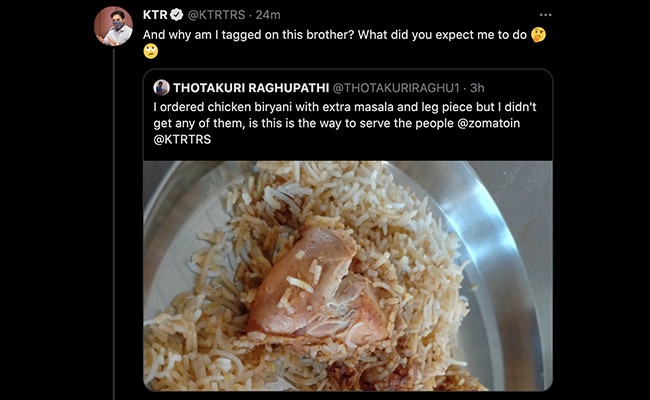 The tweet soon drew people’s attention and the man deleted it, presumably realising the true gravity of his action. But by then the minister had already seen the unusual request and even responded to it. Sounding understandably baffled, he shared the tweet and wrote, “And why am I tagged on this brother? What did you expect me to do?”

The tweet and the minister’s reaction had social media users in splits. One of the first to react was Hyderabad MP Asaduddin Owaisi who said, “KTR’s office must respond immediately,” with a laughing emoticon. He further added, “Must say that minister KTR and his team have been responding to the medical needs of the people during this pandemic, mashallah.”

@KTRoffice must immediately respond ????,must say that @MinisterKTR & his team have been responding to the medical needs of people during this pandemic mashallah

Social media users felt that the tweet proved just how seriously the people of Hyderabad took their biryani. One user even said that the tweet was one of “genuine concern”.

Take a look at some other reactions.

Getting good biryani truly a matter of national importance ???????? @KTRTRS@asadowaisihttps://t.co/UHpbwGLEfE

When it is biryani, no request is too unreasonable, some would say.