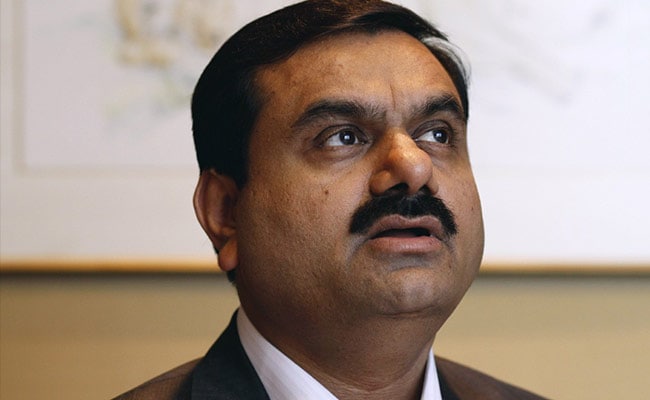 
After spending two decades building a business empire centered around coal, Indian billionaire Gautam Adani is now looking beyond the fossil fuel to cement his group’s future. His ambitious plans are getting a boost from Prime Minister Narendra Modi.

Adani has emerged as India’s infrastructure king, diversifying from mines, ports and power plants into airports, data centers and defense — sectors Modi considers crucial to meeting India’s economic goals. Investors are rewarding the pivot, betting the tycoon’s strategy of dovetailing his interests with the government’s development program will pay off.

The group’s six listed units added a combined $79 billion to their market value in the past year at the height of a pandemic, capping the best 12 months in their history. That’s the most after the nation’s two biggest business empires, Tata group and Mukesh Ambani-led Reliance Industries Ltd. Blue-chip names including French oil giant Total SE and Warburg Pincus LLC have plowed money into Adani’s companies.

In less than two years, Adani has gained control of seven airports and almost a quarter of India’s air traffic. He has unveiled plans to boost his renewable energy capacity almost eightfold by 2025, positioning himself to benefit as the government debates ambitious climate targets that would cut net greenhouse gas emissions by mid-century. Last week, he won a contract to co-develop a port terminal in Sri Lanka, a neighbor India is courting to check China’s influence in the region. Adani Enterprises Ltd. signed a pact last month with EdgeConneX to develop and operate data centers across India. 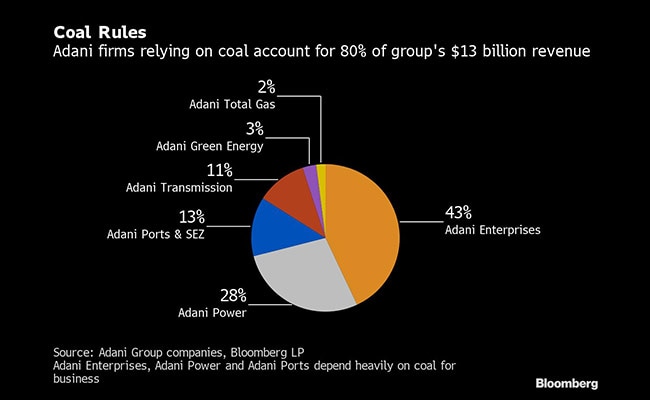 “Adani is politically savvy and invests in mostly sensible, long-dated infrastructure projects” broadly tied to government priorities, said Tim Buckley, director of energy finance for Australia and South Asia at the Institute for Energy Economics and Financial Analysis, or IEEFA. “So long as India sustains strong growth, the group is likely to prosper under his leadership and witness a surge in global investor interest.”

The focus on India’s infrastructure forms “the core of our ‘nation building’ philosophy” and the group has created thousands of jobs and delivered unprecedented value to its shareholders, Adani said at a JPMorgan India Summit in September. A representative for the group declined to comment for this story.

After starting out as a commodities trader in the late 1980s, Adani is now richer than Jack Ma and is India’s second-wealthiest person with a net worth of $56 billion. He added $50 billion to his fortune in the past year, about $5 billion more than Ambani, Asia’s richest man, according to the Bloomberg Billionaires Index. Adani’s net worth rose more than any other billionaire’s this year. 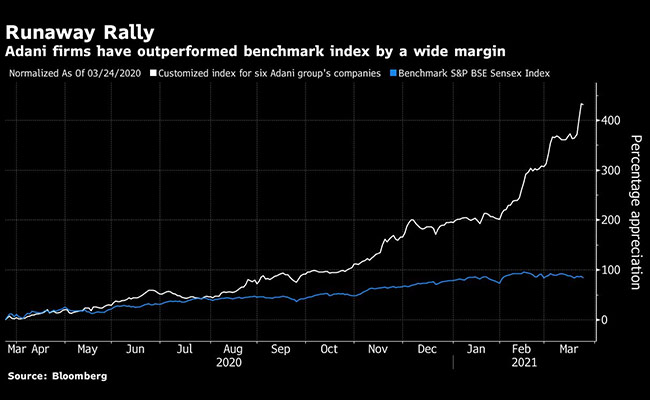 Adani shot into the international limelight when he won a coal project in Australia in 2010. Ever since, he’s come under attack from climate activists including Greta Thunberg. A “Stop Adani” campaign by environmentalists disrupted development, with pressure building on lenders to turn off the credit tap. In a 2019 interview with Bloomberg News, Adani said the project’s goals were energy security for India and jobs for locals.

But back home, Adani has been at the center of another controversy that got louder especially after Modi became prime minister in 2014. Opponents of the powerful leader say Adani’s success is largely due to his closeness to Modi — an allegation denied by the tycoon — and his propensity to align his investments with Modi’s policy objectives.

How much did your wealth increase in 2020? Zero.

You struggle to survive while he makes ₹ 12 Lakh Cr and increases his wealth by 50%.

Can you tell me why? pic.twitter.com/5sW65Kx7bi

Critics point to reports that the federal government under Modi relaxed airport bidding rules, helping Adani’s group qualify despite having shown no prior experience running an airport. A lease the conglomerate won in the southern state of Kerala faced challenge in court, with a local minister last year calling the winning bid an “an act of brazen cronyism.”

The Adani group rejected those claims and said it won through a competitive process. In a Jan. 21 statement, the government said Adani was the top bidder among 86 registrations, and the process was transparent. The nation’s Supreme Court is still hearing the dispute. The Adani group representative declined to comment.

Like Modi, Adani hails from the western Indian state of Gujarat. About two decades ago, Adani publicly backed Modi when a crisis threatened to end the rising politician’s career. Modi was under attack by rivals and businessmen who accused him of failing to prevent bloody sectarian riots in his home state in 2002. Adani created a regional industry lobby and helped kick off a biannual global investment summit in Gujarat in 2003 that boosted Modi’s pro-business credentials.

“The connection between Modi and Adani dates back to 2003,” said Nilanjan Mukhopadhyay, a political analyst who wrote the biography “Narendra Modi: The Man, the Times.” “Adani’s fortunes will certainly take a beating” without Modi in power. Should that happen, he will start forging close ties with the new ruling party, Mukhopadhyay said.

Responding to his opponents, Modi said in a parliament speech last month that the role of private enterprise in the economy is as important as the public sector, and wealth creators are a necessity. The Adani representative declined to comment.

While Credit Suisse Group AG estimates the group’s gross debt jumped 29% to $24 billion in the six months through September from a year earlier, a spinoff and ring fencing of units in 2015 has provided comfort to creditors.

The biggest threat Adani faces is coal. Financial institutions around the world are increasingly under pressure to avoid funding energy projects using the dirtiest fossil fuel. Adani Enterprises is India’s biggest importer and also a contract miner for 101 million tons annually. His investments of more than $2 billion in Australia are running into challenges and delays, and could pose a risk to any of the units stepping in to fund the development.

Adani’s new ventures face far fewer headwinds. He has plans for defense manufacturing, heeding Modi’s calls to help cut reliance on expensive imports. He is also scaling up production of solar panels and modules, again under Modi’s “Make in India” appeal. The foray into data centers follows the government’s proposed law that requires data to be stored locally.

Adani’s penchant for attracting foreign capital also jibes with the priorities of a Modi administration that doesn’t have a large enough budget to finance its infrastructure priorities. Warburg invested $110 million in Adani Ports and Special Economic Zone this month, while France’s Total took its total investment in Adani Green to $2.5 billion.

“All told, Adani Group is doing all the right things,” said Chakri Lokapriya, chief investment officer at TCG Asset Management Co. in Mumbai, whose fund recently sold its holdings in Adani units but is looking to buy again. “In coming years, Adani group will own controlling stakes in critical gateways to infrastructure, power generation and information technology.”