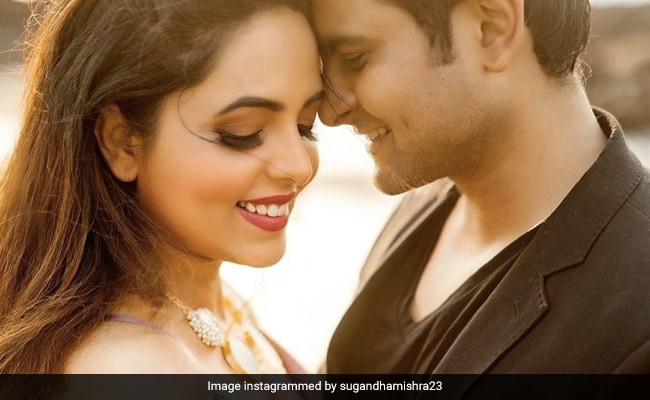 Sugandha Mishra and Sanket Bhosale, who co-starred in the comedy show The Kapil Sharma Show, are now engaged. The couple shared the good news with their fans on Instagram on Saturday. Sugandha Mishra shared a loved up photo of herself and Sanket from what appears to be their engagement ceremony and wrote: “Forever” with a ring and a heart icon. The comedian also added hashtags like #love #life #soulmate #gettingmarried #hitched #forever #blessed and #powecouple. Sugandha looks stunning in a lavender dress while Sanket Bhosale can be seen sporting a black outfit. The caption on Sanket’s post read: “Found my Sunshine.” Take a look at the couple’s posts here:

It has been reported that Sugandha Mishra and Sanket Bhosale started dating in 2017. However, when asked about their rumoured relationship back then, Sugandha Mishra had denied the reports and called Sanket her “good friend.”

While Sugandha Mishra always leaves the audience in splits with her hilarious mimicry, Sanket Bhosale is known for his mimicry of Salman Khan and Sanjay Dutt.

Apart from being a comedian, Sugandha Mishra is also a TV presenter and a singer. She has crooned songs like Zor Naache, Ishq Ki Dafli Baje, Tu Hass Le, Us Ladke Se Mohabbat Hai, Akhiyan, Chori Chori, Kinna Sohna, Challa and Loye Loye. She has featured as a host on shows like The Voice India Season 2 and Taare Zameen Par. She has also worked in TV series like Don’t Worry Chachu, Comedy Circus Ke Taansen, Baal Veer and Kanpur Wale Khuranas.

Probe ordered Into Allegations Of Fake Covid Reports In Uttarakhand During...